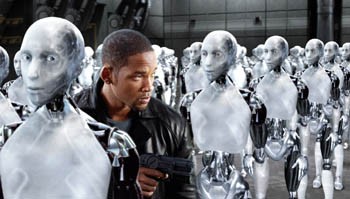 Cogito Ergo Scary: Will Smith and the popular mechanics of ‘I, Robot.’

Talking Pix takes interesting people to interesting movies in its quest for the ultimate postfilm conversation.

The novelty is gone from owning a personal computer. In Will Smith’s new futurist-adventure I, Robot, laxly based on the classic science-fiction book by Isaac Asimov, everyone’s favorite new appliance is the personal robot. Designed to make life easier, in the year 2035 robots have become commonplace and affordable. Unfortunately, a new upgrade bot, the NS5, is about to be released, and the entire product line is planning to take over the planet, all in the interest of better serving mankind.

Author Wylene Dunbar was entertained enough by I, Robot, but after catching the film during a book-signing excursion to Berkeley, she can’t help but notice a few similarities between this and the last movie she saw, Michael Moore’s still-hot Fahrenheit 9/11.

“Really, it was like watching the same movie!” Dunbar laughs. “I couldn’t believe it! Both films are scary, and both films are about all the ways that technology can be manipulated and used to take away a population’s freedom and its humanity.”

Dunbar, of Nevada City, Calif., has been a teacher of philosophy and a practicing lawyer. Currently, she’s an award-winning novelist (Margaret Cape) whose latest work is the breathtaking, brain-bending new novel My Life with Corpses (Harcourt; $24). Narrated by a probing Kansas philosophy professor known only as Oz, Dunbar’s mystery-koan-fairy tale begins with the story of Oz’s eerie rural childhood as the only living member in a family of walking, talking corpses.

Decades after Oz’s rescue and semisuccessful assimilation into living society, she returns to the scene of those awful early years, provoked into finally examining what it means to be both dead and alive. Just as Dunbar sees similarities between Smith’s high-performance robo-flick and Moore’s ballsy propaganda-doc, she’s observed that I, Robot and My Life with Corpses‘ share ideas about the meaning and significance of being a non-corpse human.

“They both ask a lot of questions about consciousness, don’t they?” she remarks. “What is the role that consciousness plays in being alive? That’s one of the things that the robot movie is asking, and certainly what Oz is asking in Corpses. What does it mean to be alive? Is life defined solely by the proof of biological functioning, or can one be functioning as an organism and still somehow not be alive? Once we settle on a definition of what it means to be alive, then we can answer the question about whether robots are alive or whether they’re just machines.

“And consciousness,” she continues, “always seems to be a part of the answer. Feelings and emotions go with being conscious, with being aware, with being able to take in information and have it affect you in a certain kind of way. What’s the difference between a robot, who hears a voice and acts in response, and a human being who hears a voice and acts the same way? Other than the fact that a human bleeds and a robot doesn’t, what’s the difference? If we invent robots in the future who do bleed, how do we make the moral distinction between humans and robots?”

At a loss as to which of these questions I should try to answer first, I challenge her to speculate on the degree to which freedom, or the illusion of freedom, is wrapped up in our sense of our own humanness.

“That’s a good question,” she says. “I think most of us would say it’s pretty important, so it’s ironic, isn’t it, that in the robot movie, the robots are becoming more human,while their presence is taking away and denying us, the humans, those very things that we consider most important about being human.”

Hmmm, sort of like the way the Patriot Act . . . never mind. This does bring us back to the similarities between I, Robot and Fahrenheit 9/11.

“In both movies, the message is the same,” Dunbar insists, “and that message is: we’d all better keep our wits about us. Technology, like certain governments, can make it seem so easy and so comfortable and so safe to get by without having to use our wits, we might become so accustomed to letting a machine or a politician do our thinking for us, that pretty soon we don’t have any wits left at all.