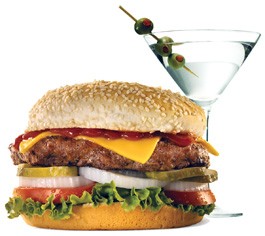 A burger and a vodka martini—the perfect lunch

Alcohol increases the appetite,” pronounces John Ernsberger, a hardworking bartender at Stark’s Steakhouse. “When you think about it, vodka is a palate cleanser, right? So when you take a shot of vodka or a sip of a vodka martini, it basically resets your palate. Usually, when you have a bite of a good hamburger, that first bite is the best. But the vodka lets you taste that burger for the first time, every time.”

The cold and crisp electric shock of a fine vodka martini paired with the comforting culinary mate of a fine cheeseburger—hot and juicy in that rich, satiating way that only a good burger can be—may not be everyone’s obvious choice of a midday nibble, but for a growing number of casual daytime diners, the burger-and-martini lunch has become identified as a great culinary vacation in the midst of a long, hard work day.

“Beer and wine is what we serve most often when people are eating meat,” Ernsberger remarks. “Next to that, a burger and a whiskey is pretty common. But we certainly do see people doing the burger-and-martini lunch.”

It has to be, of course, a vodka martini. Not just for the palate-cleansing, resetting-the-tastebuds reason that Ernsberger has already described, but quite simply because gin just makes a burger taste weird. Asked his secret for shaking up a good martini, and the reason Stark’s burgers are always so incredibly flavorful, Ernsberger is to the point.

“It’s just good beef,” he says. “And what makes a good vodka martini? Tender loving care. It’s all about not overdoing it on the vermouth. Also, it’s olives that haven’t been sitting out too long. That’s a rule a lot of bartenders forget—keep the garnish fresh.”

In Napa, finding a good burger place isn’t hard, nor is locating a bar that serves up martinis with that kind of TLC. Finding both in the same establishment, open for lunch, is a little tougher. One good Napa-based martini-and-burger bistro is the Rutherford Grill (1180 Rutherford Road, Napa, 707.963.1792), where the only burger is a cheeseburger, served on a house-made egg roll that is a perfect complement to the cooked-to-order burger itself. Totally worth the $14 price tag, the cheeseburger is matched in quality by the vodka martinis—cold and well-blended—along with the bright, lively environment.

The environment, according to some, is a major part of a good martini and burger lunch.

“What I’ve noticed,” suggests Gary Christiansen, bartender at the storied San Rafael Joe’s (931 Fourth St., San Rafael, 415.456.2425), “is that if you go to a real nice place, it really doesn’t matter what’s in the martini or how cold it is. It’s where you are, the ambiance. If the bartender is an asshole, the martini’s not going to taste as good.”

That said, Christiansen admits that a good vodka martini is a pretty fine companion.

“With a burger, you definitely need something smoother than gin, so I can see why vodka would go better with a burger,” he says. “And if its ice cold, then the martini is a nice contrast to the hot burger.”

Not that he’s impartial, but according to Christiansen, for Marinites, San Rafael Joe’s is the place to go. “It’s burger-and-martini heaven, right here.”