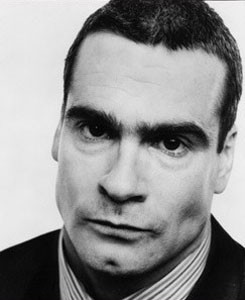 Last Angry Man: Henry Rollins has no truck with liars, thieves and scoundrels.

Henry Rollins gets the final word

Henry Rollins has a way with words.

The punk-rock icon–the prototypical American punk and former lead singer for Black Flag, one of the most controversial bands to emerge from Southern California–has a new role as host of Henry’s Film Corner, an hour-long spot on the Independent Film Channel. In a recent review of the Alien vs. Predator DVD, Rollins reached into his vast reservoir of rock ‘n’ roll trivia to dog one of the film’s horrific stars.

“I don’t know,” he mused, unimpressed by the film’s main characters, more campy than scary, “the predator reminds me of Terence Trent D’arby in a fat-man suit.”

The man who pulled no punches as a punk rocker, and who co-starred in the supremely stupid sci-fi flick Johnny Mnemonic and David Lynch’s Lost Highway, is right on target.

On the phone from Los Angeles, Rollins is no kinder to the profession that brought him acclaim in the 1980s and ’90s. “The drag about doing anything in the music industry–or show business–is that you run into a lot of liars, thieves and scoundrels,” he says with a sneer. “And it can break your heart if you’re not careful. You have to be careful not to turn into one of them.”

Once described as the angriest man in Los Angeles, Rollins isn’t about to fall into that trap. At 44, he’s still slaying dragons with his angry, articulate and angst-ridden writing, and still carrying his uncompromising, often hilarious message to the stage as a Grammy-winning spoken-word artist.

In 1980, this punk survivor changed his name from Henry Garfield (to disassociate himself from a strict and “racist” father), left the East Coast–where Rollins sang for the seminal Washington, D.C., band S.O.A.–and joined the hardcore L.A. punk band Black Flag after jumping onstage during one of their shows and being invited to stay.

Black Flag disbanded in 1986, but not before offending just about everyone, including the group’s legion of skateboard-toting, flannel shirt-clad fans.

“I never really felt like part of the punk movement,” Rollins says. “We never wanted to be aligned with anyone, because then you have to accept their value system. And we always felt that punk rock was very unmoving and unchanging. They had all these rules that said you had to wear your hair a certain length and had to play a certain way.

“We used to come out every year with a different batch of music and caught so much shit for everything we did. Now people say, ‘Oh, those albums [Damaged, Loose Nut] are classics!’ But at the time, we’d get attacked by these punkers who were yelling, ‘You guys sold out!’

“Yeah, right. If we sold out, then where’s the money?”

Indeed, Rollins and his band mates spent a fair amount of time sleeping in the back seat of a car during tours and usually crashed on the floor of SST’s suburban L.A. office, where they also worked helping Ginn to run the premier punk label. Despite the Spartan conditions, Rollins fondly recalls those years, which many regard as the golden age of punk rock. “In a way, it was,” he says. “After all, look at the band’s that were on the label at the time: the Meat Puppets, Hüsker Dü, Saccharine Trust. It was an amazing time.

“And getting to see the Minutemen three times a week, well, you couldn’t ask for better music.”

These days, Rollins–hailed by the LA Times Magazine as a “one-man publishing/recording conglomerate”–is keeping things lively. His own publishing and recording venture, 2.13.61 (his birth date), has released several works of his random thoughts and poetry, including Pissing in the Gene Pool, Hallucinations of Grandeur and 1994’s Get in the Van: On the Road with Black Flag, a two-CD set (inspired by the published memoir of the same name) that earned him a Grammy for Best Spoken-Word Recording.

2.13.61 also has published works by Exene Cervenka and Australian avant-rocker and novelist Nick Cave, as well as Henry Miller and other big-name authors.

“Retaining artistic control is important because if you’re going to make a little statement then you might as well make it without someone saying, ‘Well, we’ll just add a little red and pink on the corner and put a little mousse in your hair,'” he says. “‘Wait a minute! What happened to this thing I’ve been creating in the basement for the past eight months?’ Sorry. You just don’t want your vision fucked with like that.”