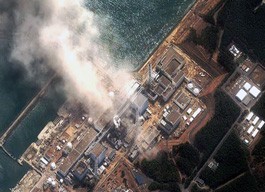 Heads in the Clouds

Like fingers of ghostly warning, the images of plumes from Japan’s nuclear disaster have crossed the ocean to tap us on the shoulder and warn, “Pay attention!” Tapping the other shoulder is the Union of Concerned Scientists (UCS), independent watchdogs of the nuclear-power industry for 40 years. Since the nuclear crises in Japan first began, the UCS has provided in-depth updates of what’s actually happening to contain the radioactivity release.

With politics shrouding facts, we won’t get the facts from Energy Secretary Steven Chu, no matter how reassuring he may have sounded on CNN. The safety and security of nuclear power plants at present is subject to lack of oversight, human error, politics—and to the influence purchased by campaign contributions. MAPLight.org reports: “Lawmakers currently serving on the House Energy and Commerce Committee received on average $9,024 from contributions connected to nuclear energy while their noncommittee counterparts received an average of just $3,314, a difference of about 63 percent.

On the Senate side, the gap is closer but still apparent. Senate Environment and Public Works Committee members received an average of $11,229 while their noncommittee counterparts took in $9,605, a difference of about 15 percent. Based on contributions from Jan. 1, 2001, to Dec. 31, 2010, the industry has given over $4.6 million to lawmakers that have served since the 109th Congress. Current lawmakers have taken in more than $2.7 million in contributions in that same time frame.”

A reliable analysis of nuclear power plant safety will therefore not come from the Nuclear Regulatory Commission (NRC) or the industry.

Nuclear engineer David Lochbaum, a former safety trainer for the NRC with 17 years of nuclear-power-plant experience—and a member of the Union of Concerned Scientists—says the practice of pressure containment in a nuclear power plant used to have a back-up system for safety, but now the practice serves as the only means to cool reactor cores, keeping radiation from escaping.

“When the business owners wanted 20 percent more power, [to] make more money,” Lochbaum explained in a March 23 press briefing, “the NRC threw out Safety Guide 1 and went with this [system] that might work but might not work as well. It was disgraceful for the NRC to do that. It’s put millions of Americans at undue and elevated risk, and it was done simply for business purposes instead of safety. The NRC’s own Advisory Committee on Reactor Safeguards is vehemently against that concept, but the NRC’s bowing to industry pressure, putting financial motives ahead of public safety.”

Transcripts of press briefings can be found at www.ucsusa.org.

Hang Up and Thrive