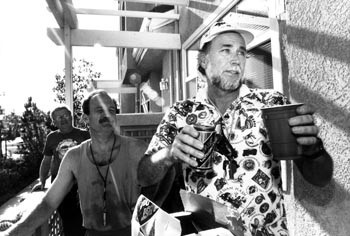 The Pause that Refreshes: Hashers take a beer break after a grueling run.

THE RUN IS OVER. Two-by-Four, a big blond man in his 40s, chugs beer from the inside of his new Nike running shoes, the brew dribbling down his face as his Adam’s apple works overtime to dispatch the cold suds. Illuminated by car headlights, two dozen funny-looking joggers stand in a circle around him in the chill winter rain rhythmically chanting: “Down, down-down, down, down-down, down.”

Suddenly Two-by-Four stops drinking. The former defensive end for the University of Nebraska reaches inside a shoe and removes a beer-soaked dirty sock. He takes another slurp. The crowd shrieks with appreciation.

It’s been a strange afternoon high in the hills above Armstrong Redwoods State Reserve just north of Guerneville. I’m witnessing the Down-Down ceremony of the Sonoma County Winers, the local chapter of the Hash House Harriers, an international sporting phenomenon that combines cross-country running with motivated beer drinking and untold silliness.

A self-described “drinking club with a running problem,” the harriers trace their origins to a handful of accountants who worked for the British colonial administration in Kuala Lumpur, Malaysia, in the 1930s. Today, according to one of the 98 websites found on the Internet, over 100,000 fun-seeking hashers belong to over 6,000 chapters worldwide in 135 countries, including Antarctica. In the Bay Area, hashes occurs on a weekly basis.

The name Hash House Harriers refers not to the sticky distillation of cannabis, but rather to the quarters where the Brits dined on such notoriously mundane food as hash, a hodge-podge dish of ground meat and potatoes. The so-called rules of hashing are simple: One person, known as the “hare,” sets the trail prior to the event with handfuls of flour every few hundred yards. The faster participants, known as the Front Running Bastards, or FRBs, determine the correct path by exploring and eliminating numerous false leads. The FRBs then leave instructive arrows for their slower compatriots. The hashers shout and whistle among themselves as well, so all find their way.

The trail begins to end at the Turkey/Eagle Split. If you’re tuckered out, follow the Turkey arrow and be dubbed a Short-Cutting Bastard. If you’re determined, follow the Eagle arrow. Near the end there’s a Beer Check. After everyone finishes, the Down-Down ceremony is capped by a rowdy meal at a local chow house.

Certainly one of the world’s most unusual forms of exercise, hashing is even somewhat less sensical than those polar bear club swimmers who paddle around in freezing water. But I can’t argue with the results. An hour after penetrating the forest, I find myself intentionally running just two steps behind a voluptuous, drunken, six-foot female Stanford University genetics researcher nicknamed “Nasty Ditch.” Clad in pink spandex, this biochemistry Ph.D. easily ranks as the most interesting running partner I’ve ever had.

My fleet-footed unrequited romance begins in a parking lot on this gray December afternoon in the misty jungle of the Armstrong redwoods. Thanks to the crummy weather, the turnout for the hash looks like a bust until a small caravan from Santa Cruz arrives. Six drunks–including Nasty Ditch and Two-by-Four–and a designated driver tumble from a giant Chevrolet van and proudly display a keg of good beer on ice.

Reluctantly accepting the responsibility of participatory journalism, I bum a Camel from Two-by-Four and knock back some microbrew. Thirsts quenched, and after a round of goofy warm-up songs led by a 65-year-old woman named “Art Tits,” our unruly mob of two dozen brave souls scramble up the steep path into the redwoods.

On this particular hash, the trail markings have been poorly set or washed away by the rain. Even veteran hashers like Zydeco, Tuna Taco, and One Night Stand grow discouraged and head back for an early beer. About three miles into the hash, only Nasty Ditch and I have persevered to find the Turkey/Eagle Split and to take the high road.

I feel like Robert Mitchum in the movie Anzio. Everybody’s dead but us.

“Why do you like hashing?” I ask Nasty Ditch. We are ascending a hellishly steep hill deep in the woods. The severe mountain forest view of the Sonoma Coast gives birth to itself below us. My legs threaten to cramp up from the trauma. My brain flashes oxygen debt. “How else would I come to such a beautiful place?” answers Nasty Ditch.

“You could be an enterprising hiker, do some research, and come here alone,” I suggest.

“It wouldn’t be the same,” says Nasty Ditch.

Indeed not. Nasty Ditch denies it, but hashing is clearly a release from the confining logic of the current epoch. Among the hashers whom I pepper with unabashedly normal questions, I find several engineers, a scientist, a nurse, and an Annapolis-trained former naval officer. For them, hashing is a license to thrive in an absurd, drunken, uninhibited world that wiggles in stark contrast to the rules of science and good society.

“I like opera. I like ballet. I like to hash. I’m a Buddhist, and I like to keep fit,” said Nylon Pussy, a proper, middle-aged South African-born woman standing with a beer in the parking lot. “Hashing is just another dimension to life. There’s the overt side to it, but below all that there are quite interesting people who are nice to talk to, and who are genuinely funny.”

Hashing is not for the thin-skinned. The event overflows with loaded sexual terminology. Yet the sport boasts built-in equality. The duty to run down false leads counterbalances the swiftness of the FRBs. Nasty Ditch says she’s seen the fastest and slowest hashers finish practically at the same time.

“I like the lack of political correctness about hashing,” says Nylon Pussy. “It’s refreshingly funny.”

And for all the crude–really nasty–carnal drinking songs pirated from the rugby tradition, Nasty Ditch claims hashers tend to be tolerant, open-minded folks who distance themselves from any participants espousing hateful doctrines.

Trotting along the alpine jungle paths, watching for clumps of flour, I freely let hashing conjure up my favorite socially incorrect running fantasy: At 30-something I’m playing “army” again. Nasty Ditch and I have just blown up an Evil Fascist Base Camp. We’re running for our lives from the pursuing enemy soldiers.

Alone on a mountainside with this nubile genetic engineer, I ask her what any curious, red-blooded, heterosexual American male would ask:

“So, can you clone me from a skin sample?”

Darkness falls as we descend the mountain path. I’m a commando. I’m a mailman on Machu Picchu. I’m the messenger at the battle of Marathon. I’m a virgin hasher alone in the woods with a beautiful woman. Whatever I am, this wacky event has got me out of the house on a crummy day in a natural paradise.

Back at the parking lot, the keg drains sure and true. We drink cold beer in the rain. Everybody’s here: Zydeco, Nylon Pussy, Likes to Lick, One Night Stand, Seven Veils, Tuna Taco, Cyclops, Two-by-Four, and, of course, my beloved Nasty Ditch. The harriers are singing:

Any newcomers (the Newbies), the trail-setting Hare, and even the reporter-at-large must stand within the ceremonious Down-Down circle and drink to this irreverent serenade. Nasty Ditch and I must drink together for the official sin of finishing “Dead Fucking Last.”

And for the offense of wearing new shoes, the musical mob ritualistically condemns Two-by-Four, the globe-trotting hashing maniac, to slurp pale ale from his soiled virgin Nikes. Socks and all.