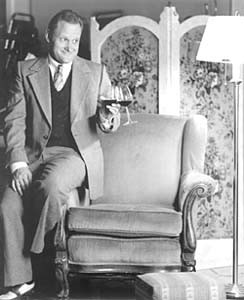 SRT can’t pull a rabbit out of its hat

THERE IS A PHYSICS experiment being conducted during Summer Repertory Theatre’s production of playwright Mary Coyle Chase’s Harvey. Looming above the exit sign of the Santa Rosa High School Auditorium’s stage is a clock. Unfortunately, it seems to be there so audiences can witness, firsthand, time gradually slowing to a standstill under the influence of lackluster theater.

Veta and Myrtle are understandably concerned about Dowd’s mental well-being and (perhaps less understandably) conspire to lock him up in a nuthouse. Meanwhile, perfunctory subplots develop between various minor characters (a bevy of one-dimensional psych-industry professionals) to fill out what is chiefly a philosophical treatise on healthy living with one foot firmly planted in the illusory.

Unfortunately, director Dan Kern chose this production to reveal an unusual faculty for taking a taut (and Pulitzer Prize-proven) script and insinuating his own brand of slack into it. Consequently, SRT’s Harvey develops into a protracted, listless experience with more missed beats than a one-legged tap dancer imperiled by spilled ball bearings.

William McNeil turns in an earnest and dutiful performance as Dowd, with nary a nod to James Stewart’s immortalization of the role in the 1950 film. McNeil should be applauded for forgoing an impersonation of the Golden Age actor (a common pitfall), but ultimately his performance comes across as uninspired and tepid–“understated” would be an understatement. Conversely, Terri Park invests herself so zealously into the role of the nattering, rein-tugging sister Veta that her performance practically demands a chorus of the proverbial phrase “less is more.”

As the social-climbing Myrtle, Hollie Martin effectively portrays the turn from the demure debutante beleaguered by her uncle’s preoccupation with his phantom rodent to the plotting, avaricious niece intent on using Dowd’s property for a real estate venture while he is bouncing off the psych ward’s rubber walls.

Mercifully stealing the show is Tim Sabourin as Dowd’s senior psychiatrist, Dr. William Chumley. Sabourin very nearly saves the ho-hum production with his superb expressions, antics, and comic timing and is a solid argument for human cloning. A whole cast of Sabourins would be marvelous.

Scene designer Eric E. Sinkkonen’s sets are decidedly subtle and successful re-creations of an upper- middle-class 1940s home (replete with wood paneling, fireplace, and vintage furniture) and an antiseptic mental hospital administrative office. However, the set seems possessed by a poltergeist: Opening night saw candlesticks leaping inexplicably from their holders and a telephone ringing after it was answered.

In the final analysis, SRT’s Harvey is like wading slowly into an episode of major depression. But, like Dowd’s bunny, the effects of the play can perhaps be expunged with a fistful of psychotropic medication.