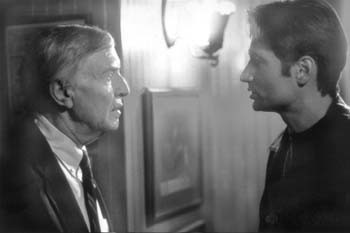 ‘The Goners’ creators get scared at The X Files

In his ongoing quest for the ultimate post-film conversation, writer David Templeton sends interesting people to interesting movies. This time out, he asks the popular science-fiction writing team of Jamie Simons and E.W. Scollon to check out the very-scary film version of T.V’s phenomenonal The X Files.

There are two kinds of people in the world, somebody once said: those who divide space-aliens into two different categories–and those who don’t. E. W. Scollon and Jamie Simons do.

The creator/writers of The Goners, a remarkably popular science-fiction book series for kids, have observed that throughout modern literature– including movies and television–extraterrestials are either kind and benevolent, possessed of magical powers and good intentions, or they are snarly, drooling monsters that want mainly to frighten us, enslave us, use our bodies for gestation, and suck out our our brains for dessert.

For the record, Simons and Scollon prefer the former, such as the gung-ho, time-traveling, teenage aliens in the Goners books (Avon, 1998, $3.99 each); all they want to do is save their elders, long ago marooned on Earth and taken to impersonating humans. Remember Thomas Jefferson? He was a Goner, along with several other historical figures known for their goodness and wisdom. With the possible exception of Napoleon–a partially mutated space-case with an overly-developed sense of order and control–there’s not a scary alien in the bunch.

The good-hearted adolescent heroes of Scolon and Simons’ epic adventures would, in fact, probably be scared out of their wits if they ever came face-to- face with the kinds of slimy, horrific, slobbery fellows that make an appearamce in The X Files, the latest in a long string of movies suggesting that if something is out there, it’s probably hungry.

And what did Scollon and Simons think of the film?

“I got through it all right,” chuckles Scollon, shortly after returning from the theater, “But Jamie …”

“I walked out after 10 minutes,” Simons confesses with a laugh. “I admit that I don’t like being scared. This was way too much for me.”

The film–based on the phenomenal TV series of the same name–follows intrepid FBI agents Fox Mulder and Dana Scully as they scamper in and out of trouble while tracking down the truth behind a certain global conspiracy to cover up the existence of the aliens, who may be planning to colonize Earth, and whom appear to have a very low opinion of the human race.

Come to think of it, Scollon and Simons don’t always seem to think very highly of humanity either. Earth, after all, is frequently referred to in the Goners books as “the least known of the Lesser Planets,” and most– but not all–of history’s great peacemakers turn out to be non-human.

So why not turn Earth into a giant smorgasboard–and just be done with us?

“I’d rather we not be eaten, to tell you the truth,” Scollon admits. “But we make the case that humanity hasn’t always lived up to its potential.”

“I do think we’re probably at the bottom of the planetary heap,” laughs Simons. “We’re not much to write home about. I’m personally not very encouraged by what we’ve done with the planet Earth. But in fiction, we can make things right with the world.

“You know,” she continues, “until I started writing the Goners, I never really liked the science fiction genre. The only science fiction book I’ve ever read and loved is Arthur C. Clark’s Childhood’s End, because I liked the idea of aliens coming to earth to help us mend the mistakes we’d made. I read that book in college, it was in the middle of the Vietnam War, and I could think, ‘Yes, we are blowing it, but someone’s going to come and help us.’

“I do believe there’s life out there on other planets,” she adds, “and it’s very comforting to me to believe that someone out there is doing things better, and that maybe they’ll come help us out some day.”

Simons admits that one or two people have been disturbed at the Goners notion of our home planet as being insignificant to the Universe at large.

“One friend of mine thought it was a terrible message to give kids,” she reveals. “That humans might not have behaved well enough to deserve more honor in the universe.”

Ray Bradbury’s The Martian Chronicles is mentioned. A book that was also once criticized, it describes the first travellers to Mars as arrogant rogues, carelessly dumping litter into the pristine Martian canals, racing through the ancient Martian cities, using everything in sight as target practice.

“It gets back to that thing of, ‘Are we going to be the heroes of the Universe or are we going to be just one part of the whole stew,’ Simons says. “Is it even possible for us to see ourselves as part of a giant intergalactic stew, or we will always view ourselves as masters of the universe. Will we ever grow up?”

“One element of The X Files that I like,” Scollon points out, “is the sense of wonder that Mulder has, in spite of all the frightening things he sees and experiences. Its almost childlike, his point of view. Toward the end, in Antarctica, when he finally does see a space ship lift of and fly overhead, Mulder breaks out in a big smile, even though he’s on the verge of freezing to death. So through his eyes, we get a sense of the kind of glorious strangeness of childhood, where anything is possible and even the scary stuff is slightly wonderful.”

“But who knows?” adds Scollon. “It might be something wonderful.”