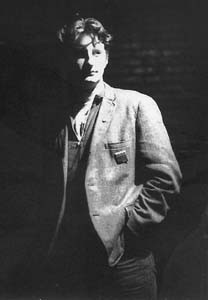 YOU CAN BET Bruce Springsteen would give his impeccably capped eyeteeth for this project. When folk legend Woody Guthrie’s daughter Nora–who runs the Woody Guthrie archive–went looking for someone to pen music to some of her famous dad’s unpublished lyrics, she made a wise choice by selecting British working-class hero Billy Bragg. On 15 tracks, agit-rocker Bragg breathes life into remarkably contemporary-sounding songs, teaming up with members of the alt-country unit Wilco. Natalie Merchant and bluesman Corey Harris also contribute to this stunning collection of raw, visceral folk rock, ranging from the intensely personal to the incisively satiric. But make no doubt about it, the star is Woody Guthrie, who died in 1967 after a long bout with a debilitating nerve disease. While Guthrie’s recording career was over, for the most part, by 1947, he penned hundreds of lyrics that never saw the light of day– until now. The plaintive “One by One,” a litany of sorrows (“One by one, my hair is turning gray/ One by one, my dreams are fading away”) is worth the price of admission alone. Prepare to be blown away.
Greg Cahill

WHEN TOM WAITS signed with Chris Blackwell’s Island Records in 1983, his music took a dramatic turn from the folk/jazz-style he had established throughout the ’70s during his tenure with Asylum Records. His lyrics still dealt with the other side of midnight, but instead of beat raps and neo-Tin-Pan Alley-style musical accompaniment, he was now banging his tunes to the rhythm of a very different drummer– more aligned with Captain Beefheart’s avant-garde stew than closing time at the hep-cat lounge. This compilation pulls 23 barbed-wire tracks from the seven albums he recorded through 1993, from the personal apocalypse of “Earth Died Screaming” to the aching sentiment on “Downtown Train” to weary resignation on his enduring “Time.” As Waits readies his first album in five years for a new label, there are signs that it will signal a more rural direction, leaving Beautiful Maladies as closure for the second phase of his unique musical career.
TERRY HANSEN

ELECTRONICA has already gone from the next big thing to no big deal, but the trend has made a lasting link with rock. Indie hardcore stalwarts Girls Against Boys willingly embrace rock’s electronic future on this major-label debut, but they do so with the middle finger of their own harsh and heavy guitar terms. There’s nothing fluid, ambient, or loopy in their keyboard parts and samples. Instead, synth pulses add thickness and conflict to what these guys do best, which is to stomp out ultra-tight riffs that are more about big metal than slacker punk.
KARL BYRN

THIS TREASURE CHEST of rarities from 1971 through 1988 at once begs the question, “Why weren’t these released before now?” Many of the 30 songs on this two-CD set stand with Morrison’s finest work and in some cases surpass the previously released versions. For example, the newly revealed take of “Wonderful Remark,” originally found on the King of Comedy soundtrack, is an absolute masterpiece in this new context. Among the other chestnuts are “Laughing in the Wind,” featuring Jackie De Shannon on vocals, and “High Spirits,” recorded with the Chieftains. The traditional folktale “John Henry” gets a sweaty soul workout from Morrison, who refuses to let it go until he’s ready to drop at the end. The collection’s subtitle–“Unreleased Tapes, Vol. 1”–bodes well that more of these gems will see the light of day. By embracing his past, Van Morrison’s future recordings may again channel the inspiration of his transcendental early work found here.
TH