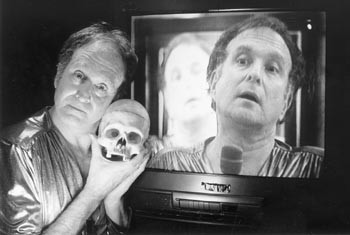 Fred Curchack’s one-man ‘Hamlet’ is both irreverent and poignant

WHAT ART THOU that usurp’st this time of night? The ghost of Hamlet’s murdered father? Or Fred Curchack’s stirring one-man show, Hamlet: Bloody, Carnal, and Unnatural Acts, at the Cinnabar Theater? The answer is both. A dynamic crossbreed of theater, dance, music, and video, Curchack’s Hamlet is a deft whittling down of Shakespeare’s five-act behemoth of madness and fratricide into a 90-minute tour de force.

Curchack teases out the subtle humor embedded in Shakespeare’s text–gags and double entendres usually glossed over in more academic productions. He accentuates bawdy puns with cartoonish ribaldry as when he’s playing Ophelia in a stringy wig, strumming a guitar with heavy-metal fervor, and lamenting that Hamlet “will not come again.” It is asinine, yes, but hilarious and characteristic of Curchack’s delightful irreverence.

Likewise, Curchack plays Horatio in a Day-Glo fright wig and goon goggles, and bookends the play with the character’s signature soliloquy–“So shall you hear of carnal, bloody, and unnatural acts. … All this I can truly deliver.” And deliver Curchack does–his videotaped climax is a bloodbath on par with the gory work of film-violence pioneer Sam Peckinpaw.

Many of the actor’s video sequences owe a debt to groundbreaking television comedian Ernie Kovacs, whose work, like Curchack’s, constantly challenges the medium. Curchack performs a number of sight gags in lock-step with video sequences seamlessly interwoven into the work despite the remote control he wields onstage to cue them. At times, Curchack appears to reach into the idiot box: he accomplishes costume changes and character switches through it, and characters touch, play patty-cake, fence, and die together as the thespian interacts with the screen.

But for all its paring, sparing, and daring, Curchack’s Hamlet maintains the integrity of its original, including its complicated story arc. Many stage-borne interpretations attempt to personalize the play, but few actually succeed in making it personal, which Curchack achieves with aplomb.

Curchack’s Hamlet is bloody good theater and is as much required viewing for scholars of Shakespeare as it is a punchy on-ramp to newcomers of the bard’s oeuvre.