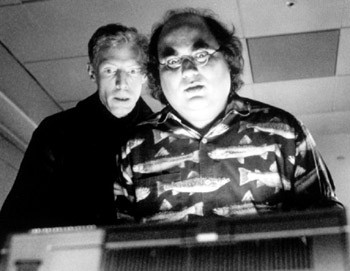 SOME PEOPLE are just more secure than others. They walk this earth in a cocoon of calm assurance, all but glowing with self-worth. Their conspicuous confidence is inspiring. And dynamic. And oh-so-attractive.

On the other hand, insecure people are much more fun to watch.

“This Josh Kornbluth guy, for example, is so funny exactly because he’s so uncertain and insecure,” observes author-
filmmaker Arthur Bradford, shortly after taking in Kornbluth’s new comedy Haiku Tunnel.

Bradford, tall and lanky, blue-eyed and tangle-haired, is no stranger to insecurity himself, as he’ll happily tell you.

He is also a very busy guy, right in the midst of two different cross-country tours. One is to promote his first book, Dogwalker (Knopf; $20), a collection of outlandish short stories. The other is to attend screenings of his HBO documentary How’s Your News?, based on Bradford’s work at a camp for adults with disabilities.

Despite his full calendar, Bradford accepted my invitation to see Haiku Tunnel, a Sundance hit based on Kornbluth’s popular one-man show about a quirky office temp (and would-be writer) whose neuroses are strained when he “goes perm” at a big law firm.

This is a guy so insecure about being a law secretary that when a gorgeous lawyer from across the street falsely assumes Kornbluth is also a lawyer–and shows romantic interest–he helplessly plays along. Ironically, he actually starts to feel good about himself. Then bad things happen. Funny things.

“This movie, Haiku Tunnel, is about that period of time when you’re trying to figure out what you want to do with your life,” Bradford suggests. “There’s something really wonderful about that time, but there’s also something . . . I don’t know . . . unsettling.

“When Josh asks his attractive black co-worker, ‘Would you ever see me as man material?’ and she says, ‘You’re poor, you’re unstable, and you’re white’–that’s true! That’s real!

“That,” Bradford confesses, “is exactly how I always felt before I finally got published. As an unpublished writer, I knew I wasn’t a good bet for someone.”

“Well, now you do have a book out,” I remind him. “Feeling better?”

Fortunately, Dogwalker is a good book. It’s strange. Outrageous even. But it’s getting great reviews. Bradford may have to get used to feeling less like Kornbluth before he pretends to be someone he’s not, and more like Kornbluth the self-confident fraud.

Once, after having just won a fellowship at the Stanford Writing Project, Bradford met an attractive female in Golden Gate Park. She was also a writer. An unpublished writer. So he attempted a Kornbluth-like deception, passing himself off as a literary failure. It didn’t work out. “I was always afraid she’d find out I was published, that I was writing at Stanford, and that she wouldn’t like me anymore,” Bradford explains.

“Sounds like a love-hate relationship with success,” I therapeutically mention.

“Oh, I agree,” he nods. “Relatively speaking, my self-confidence is up right now.”