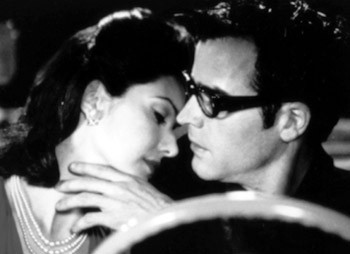 NO WONDER David Lynch called his last movie The Straight Story–it presented a total contrast to the director’s usual curlicue plotting. Apart from The Straight Story and 1990’s Wild at Heart, Lynch has spent his last 10 years or so creating a continuing and convoluted epic of demonic interference in human life.

In Blue Velvet (1986), the gang members (sexually twisted outlaws led by Dennis Hopper) are so evil that they dwell on the fringes of the supernatural. Lynch’s Lost Highway (1997) also features a devilish “Mystery Man” (Robert Blake) with the ability to be in two places at once. His character fit perfectly with the plot of Lost Highway, a film that turned itself inside out, having neither beginning nor end.

Mulholland Drive is more Q-shaped, a circular narrative with a short epilogue. The film is salvage work, put together from a TV pilot rejected by two networks. In the newer additions, Lynch has changed the story from a kind of Nancy Drew investigation into a tale of the fatal betrayal of two lovers.

Mulholland Drive opens with a frenzied jitterbug contest, sampled, repeated, and projected on a blank violet background. From a spreading haze at the bottom of the screen, two misty faces materialize: a pair of grimacing elderly henchmen in Mr. Roque’s employ, spying on the dancers and selecting a girl for their use.

Like most demons you read about, Roque–a mute creature (played by Michael J. Anderson) who lives in a huge glass tank–prefers virgins. This one is named Betty Elms (Naomi Watts), from Deep River, Ontario, who wins the contest and comes to Hollywood to become a star.

House-sitting her aunt’s Hollywood apartment, Betty encounters a nude woman (Laura Elena Harring) in the bathroom. The woman, who calls herself “Rita,” is the amnesiac survivor of a botched murder attempt. The two–one a complete naive, the other without memory–try to solve the mystery of Rita’s identity.

The most factual parts of Mulholland Drive seem to be supernatural. We can’t tell what the demons are doing, but at least we know they’re doing it. Roque’s men are everywhere: they include a homeless troll behind a coffee shop, who possesses a blue box that’s an interdimensional worm hole; and a frightening albino named Cowboy (Monty Montgomery), who threatens violence with a little speech about attitude.

Perhaps in its complete form as a TV series, Mulholland Drive was intended to be a surreal meditation on the movies themselves. For example, Lynch has cast a living piece of MGM’s golden age, dancer Ann Miller, as Betty’s salty landlady, Coco. Perhaps in the longer version, Adam, a film director on the run, would have been more than the red herring he is in this version of the story.

Even retooled from pilot to movie, with characters jutting out like sawn-off timbers, Mulholland Drive is as sensual, elusive, and abruptly funny as a filmed dream-journal. That the mysteries of Lynch, our corn-fed Cocteau, are insoluble just make them all the more ravishing.