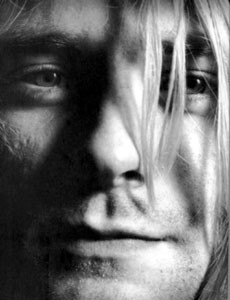 We Hardly Knew Ya: Kurt Cobain – calculating, crazy, and cruel?

IN ADDITION to being a month of treachery and angst, September marked the 10th anniversary of the release of a record called Nevermind by a rock band called Nirvana. The anniversary doesn’t seem to have been especially marked by very many people–unlike all anniversaries to do with the Beatles–but it meant a lot to me.

Unfortunately, what it reminded me of most is the line I consider the most profound in all rock and roll. It comes from Bob Seeger’s “Runnin’ Against the Wind” and it goes, “I wish I didn’t know now what I didn’t know then.”

That phrase applies to all kinds of people, from JFK to Gary Glitter, and judging by Heavier than Heaven (Hyperion; $24.95), the amazingly detailed new biography about rock and roll’s premier suicide of the ’90s, it applies to no one more than Kurt Cobain.

To read this book is to become disenchanted not only with Kurt–who is portrayed as petulant and calculating, crazy and cruel–but with Nirvana, grunge, and rock itself. That being the case, it’s hard to imagine who would want to open it.

This is not to say, however, that Heavier than Heaven is a bad biography. If anything, it suffers from being too good; a phenomenally well-researched account of Cobain’s 27 years. Author Charles Cross has done an almost mind-boggling amount of digging, offering everything from excerpts of Kurt’s own journals to interviews with his elementary school teachers.

Cross is not a dry stylist in the least. But he sometimes errs on the side of exaggeration: it takes him exactly two paragraphs to use the term “rock & roll salvation.” Cross is convinced that Nirvana was one of the most important bands–and Cobain the most important songwriter–of his era. And yet his argument is that Cobain, far from being the saintly outsider he made himself out to be, was deeply into being a rock star, determined from the start to “make it big.”

This doesn’t change the fact that Nevermind and Live Unplugged in New York are two of the best records of the decade, but it does ruin some of the mythic aspects of the Nirvana legend–and not to any good end.

Heavier than Heaven also suffers the same fate as many biographies. In spite of the incredible detail, there is no real explanation either for Kurt Cobain’s genius or for his deep unhappiness at the end of his life (although his miserable marriage, which may have accounted for a lot of it, is sugarcoated by Cross’ unabashed kindness to his main source, the Mrs.).

In the book, Cobain goes from your classic dumb redneck to arty punk-rock philosopher in about one second flat. This is partly because Cross omits a detailed description of the Washington town of Olympia, where Kurt moved after high school, and its peculiar hippie-punk-indie-rock ethos.

The hole is also there because that leap is unknowable, both in Cobain and in every other genius of his order: Dylan, Lennon, Gandhi, whoever. What made them what they are? We’ll never know, and I find the exploration of their origins highly distasteful. I didn’t want to know that Kurt killed a cat when he was a teenager. It doesn’t improve my understanding of Nirvana’s music.

No doubt everyone who ever met Kurt had been hoarding–and embroidering–their stories, waiting to tell them to Cross. But does that make them true? Not only are some of the narrators here as unreliable as Tristram Shandy, but there are some things about these times and this person that I remember differently–nights I spent in Nirvana’s company that shine like pure goddamn gold.