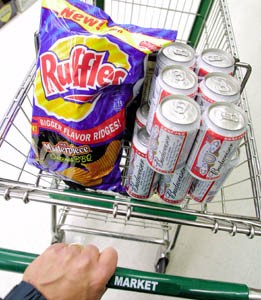 Of grocery carts and guessing games

IT ONLY HAPPENED once that I can remember, and that was five or six years ago, but the details of my supermarket encounter remain as vivid as a National Enquirer point-of-sale display: I reached to pick out my usual container of cottage cheese (fortunately, I have no dieting trauma associated with it, and enjoy it with pineapple). I wanted to keep moving because I left my coat in the car and it was chilly in the dairy aisle. But the sharp-nosed older woman in a tan coat, reaching to get a box of margarine, wanted to make a point. She looked at the container in my hand and said cheerily, “You really ought to try the 1-percent cottage cheese.”

I was initially unable to fathom why this stranger was taking me to task for my choice in dairy products, but she soon made her point clear: “It tastes just fine, and, you know, it’s lower in fat.”

Being new to fat liberation and the art of fat-friendly comebacks, I mumbled something like, well, this is my favorite brand, and we moved apart, a blushing large woman and a busybody who probably felt great about spreading the low-fat gospel to someone who “obviously” needed it.

Nowhere are our eating habits more exposed to public scrutiny than in grocery stores. The gleaming cages of the carts provide the illusion of containment and privacy, but the reality is that everything is hanging out for public assessment. People who wouldn’t even think about peeking in our cupboards or rummaging through our refrigerators without an invitation are free to mentally weigh out the calories, grams of fat, and menu of every product in our baskets.

“YOU ARE what you eat.” We play the game every time we look at the cart of the person in front of us and imagine to ourselves where they are going, what their plans are, what kind of person they might be. Heck, I do it, too. Five kinds of flavored potato chips, along with red-eyed laughter: duuude, don’t bogart that joint. One steak and a six-pack of Bud: lonely guy on Monday night. Turkey breast, diet cola, magazine with a half-naked anorectic on the cover: woman on a diet. It’s not such a great step from this to some buttinsky looking at my cottage cheese, looking at me, and imagining that I must be–I should be–interested in finding a low-fat alternative to my small-curd indulgence. Of course, there’s a difference between playing mental guessing games with someone else’s 10-items-or-less and offering them diet tips in the aisles. It’s the difference of intent, and of some presumption of personal involvement, and then actually saying the words.

The last time I felt people’s eyes so sharply upon my eating habits was in college, the year when I was getting food stamps. They made my penniless existence easier–and I didn’t faint anymore at work for lack of eating–but standing in line at the grocery store was a whole new experience in hostility. As I hurriedly tore out the food stamps, the food moved along the excruciatingly slow conveyor belt, getting scanned twice: once by the cashier and once by the eyes of the people behind me. It didn’t matter whether I was buying my steak (with expiring-today, 50-percent-off tags) because I was having my period and seriously craving iron, or that I just wanted some Ovaltine to sit with while I studied in my damp cellar apartment. There was no explaining.

At a deeper level, I resented then, as I do now, the idea that I need an explanation. Why does it matter how I pay? Why does it matter what my weight is? We all have to eat, and we have the right to determine what and how much we want to put into our mouths.

Of course, the grocery store has become a treacherous, confusing place for everyone, a battlefield of ads and information from food manufacturers, whose best interest is to have people feel insecure about what they eat. That way there’s always demand for products that play to those insecurities. Read the packages and you can track the dietary worry of the day. Salt raises blood pressure? Let’s offer low-sodium soups (that need more than a few grains of salt to taste good). Fiber! It’s good for what ails ya! Next thing you know, those dish-scrubbing pads will get labels saying that they’re naturally high in fiber. Of course, fat is the biggie, has been for years. I saw a “low in fat” sticker on an apple recently and immediately grew depressed that people don’t know this already.

The point here is that grocery stores are only partly in the business of selling you food and essential feminine hygiene products (ooh, don’t get me started). Grocery stores also serve as showcases for the food industry’s best marketing games. That interfering old biddy with her 1 percent cottage cheese wasn’t being mean; she was just parroting the slogan from the side of the carton.

Which doesn’t mean I feel compassion for those unwitting pawns of the diet-food industry. It just puts me on the lookout for better, sharper ways to snap them out of it. Next time I’ll do what I’ve started to do when faced with a choice between fat-free and regular baked goods at a coffee counter. “Does this have fat in it?” I say, pointing at the ones that I know are “fat enriched.” When I get a confused nod or a nervous giggle, I say, “Oh, good! I’ll take it.”