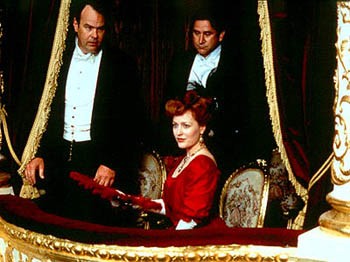 ‘The House of Mirth’

Why a 19th-century hooker could kick Gillian Anderson’s ass

“DEATH,” purrs author Sheri Holman, dropping a silver spoon into her bowl of Irish stew and reaching for a glass of water. “Death is not as ugly as people think. Death can be a very beautiful thing.”

It’s early evening, and the tiny pub is packed. Our table is within immediate earshot of at least a dozen people, all of whom now turn their heads to see who’s making such unconventional dinner conversation.

If Holman (author of A Stolen Tongue) notices the attention she’s getting, she gives no sign of it. Next, she launches into a highly visual anecdote about holding an old woman’s lungs in her hands–“It was lighter than air, as light as a napkin,” she says–while witnessing an autopsy as research for her latest novel, The Dress Lodger.

Holman displays a real knack for making heads turn. On the page and off.

Set in England during the 1899 cholera epidemic, The Dress Lodger follows Gustine, an unstoppable 15-year-old prostitute, and her fateful alliance with a grave-digging doctor. It has become a book club sensation since its hardcover publication last year. Holman, 34, has a way with death–be it death by cholera or by less natural causes–and her atmospheric resurrection of Industrial Age England has won the New Yorker a quiet cult of fans on both sides of the Atlantic.

We’ve met to discuss another story set in 1899: The House of Mirth.

A critically acclaimed film version of Edith Wharton’s masterpiece about class warfare in 19th-century New York City, the movie stars Gillian Anderson (of X-Files fame) as Lily Bart, a woman with serious debts, unappealing suitors, and a Hamlet-like aversion to making up her mind.

Whereas Anderson’s Agent Scully is tough as nails–and would not hesitate to grasp a woman’s lungs in her own hands, by the way–Lily Bart can’t seem to get a grip on anything.

Holman agreed to see The House of Mirth in part because she has a somewhat unique connection to the book. She read it a few years ago when she was in Syria, on vacation with her then-boyfriend, now-husband.

“We were in a town called Hama, near Damascus, and I had horrible dysentery,” Holman explains. “I was so, so sick, and the bathroom was way down the hall where I was staying in this awful, cockroach-infested hotel. So in between trips to the bathroom, I read The House of Mirth.

“I have to admit,” she confesses, with a big smile, “that when you invited me to see The House of Mirth–when I heard those words House . . . of . . . Mirth–my first response was that I felt my stomach clench. I got this intense sense of memory of retching my guts out in that awful hotel in Hama.”

More heads turn; multiple sets of eyes narrow and peer before they all snap nervously away. Holman laughs, shaking her blond-maned head in gleeful mock embarrassment. “But the movie was great,” she adds.

Our talk turns temporarily to less queasy matters, as I suggest similarities between The House of Mirth and The Dress Lodger–mainly that each tale shows the cruelty of class distinction, the rift between the haves and have-nots. But I also argue that poor Gustine’s situation is much more dire than Lily Bart’s. Holman disagrees.

On cue, Holman demonstrates her Lily Bart identification by adopting an uncannily accurate expression of wide-eyed astonishment, with an overlay of tight-muscled panic and a smidgen of open-mouthed disbelief.

It’s a good picture, Holman confesses, of how she’s been feeling of late. As The Dress Lodger finds a wider and wider audience, raking up an impressively expanding pile of dollars, the author has been broadsided by an unexpected truckload of anxiety.

“For the first time in my life, I feel I have something to lose,” Holman says. “I think [Lily Bart’s] fear, the precariousness of her position, is a really American thing. In America, it doesn’t matter who you are or what you once accomplished. If you have no money, you lose your standing.

“If Lily Bart had been a different kind of person,” Holman muses, “maybe she could have made the money back, but she’d never been trained for work. She goes to the milliners to try and learn a skill, but she can’t do it. She’s literally fit for nothing.”

Holman pauses, sliding the stew bowl back over for another few spoonfuls.

“It’s weird. As much as we do hate poverty in this country,” she says, “it’s kind of a love-hate relationship. Poverty also has a certain attraction.

“When I first moved to New York from the Midwest, it was partly under the allure of poverty,” she continues. “I had $800 in my pocket. I lived in every bad neighborhood I could live in. I purposefully set myself in harm’s way because I thought that’s what artists did. I really did have a romantic view of being without money. I thought it would ennoble me to cast my lot with lost and drifting people. Instead, it ground me down to almost nothing.”

Fortunately, Holman has more Gustine than Lily Bart in her. She’s fought her way back up, and the odds are good that she’ll be staying up. But speaking of fighting, Holman has one last thing to say about Gustine and Lily.

“If the two of them ever got into a street fight,” she suggests wickedly, “Gustine would kick Lily Bart’s ass.”