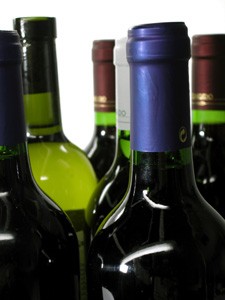 Drinking It In: Wine-industry experts and vinters wonder if last year’s harvest was an embarrassment of riches or a burden.

Is the vine tonnage reaped from 2005’s growing season in fact a bitter harvest?

Throughout last August and September, the bottling line at Ravenswood Winery worked well into the night, making room for the batch of grapes that the 2005 harvest would bring. In a warehouselike chamber deep in the heart of the Sonoma winery, the bottling line, built during the mid-1960s, sprawled across the room’s perimeter, filling an endless queue of dark green bottles. The machine worked double shifts–corking, foiling, labeling, boxing and then piling layer upon layer of ready-to-drink wine onto wood palettes.

Although Ravenswood now produces about 1.1 million cases of wine per year, the winery is still growing, so double-shift bottling has become its preharvest modus operandi. This year, however, it turned out to be more important than ever as the goddess of fertility smiled on California, and grape harvests set records. In terms of tons, Napa County’s wine grape harvest (up a whopping 50 percent from 2004) and Sonoma’s (up 39 percent) were the largest in history. Statewide, red and white wine grape tonnage skyrocketed 35 percent and 34 percent, respectively, more than last year. Meanwhile, wine grape prices stayed fairly steady, increasing ever so slightly statewide. The late harvest translated into superior grape quality, and everyone lived happily ever after . . . or did they? The impact of the 2005 harvest is yet to be fully understood.

As grapes kept flooding in through the long harvest season, vintners scrambled to find more space to ferment all these grapes. By the time the always fashionably late Cabernet Sauvignon arrived, the industry had to start getting creative.

Peter Mathis, the winemaker and general manager of Ravenswood, sits in his office overlooking a former rock quarry, now a lake stocked with bass, and contemplates the year’s surprise crop. He remembers the last really huge harvest in 1997 as leading to a “tragic capacity problem,” in which he practically had to beg people for fermentation space. This year, however, thanks to either modern communications infrastructure or Ravenswood’s more established status, snagging a half-million gallons of extra capacity took just a couple phone calls to wine brokers.

Despite inroads in trading spaces, the industry still faced a space shortage in 2005 that literally couldn’t contain all that growers had to offer. Some growers were forced to let their excess grapes fall to the ground as organic matter, although this number is thought to be only about 5 percent of the state harvest. Other growers tried to sell excess grapes that weren’t covered by their contracts on the spot market as bulk wine. Some even gave it away.

Jim Lapsley, adjunct associate professor of history and economics of winemaking at UC Davis, used to make wine commercially but is now a home winemaker. “I was given very good North Coast Cabernet this year. The grower told me, ‘If you will pay for the picking, then you can have it.'” With the average per ton price of North Coast Cabernet ringing up at $2,200 (one Napa lot even sold for $26,000 per ton), that’s quite a bargain. Of the unexpected gift, Lapsley assures, “That has never happened in all my experience and won’t happen again.”

Growers are in a tricky position. Average grape prices in Sonoma and Marin counties were almost exactly the same as the previous year, and Napa grape prices went up about 2 percent from last year. In all, the vast quantities harvested allowed North Coast growers to go home with a collective pocket bulging with a billion dollars; if individual growers managed to sell off their excess, then they shared a little in the bounty. However, this year’s oversupply will likely have a depressing effect on grape prices next year and possibly beyond.

Helping to put the 2005 harvest in perspective is the Manic-Depressive Wine Business Wheel of Fortune, a cheekily titled model of supply and demand devised by Bill Turrentine, president of Turrentine Wine Brokerage, a company that matches wine buyers with sellers. The wheel relates the wine industry’s typical ebbs and flows to the three- to four-year period that newly planted vineyards generally require before they’re ready to pick commercially.

Winery marketing departments have been working hard to build demand for the excess vintages 2001 through 2004–results of the planting rush between 1994 and 2000–and had been succeeding. Turrentine explains, “New planting had just about ceased and many wineries launched new brands and repositioned old ones. Sales had just about caught up with inventory. Then Mother Nature surprised everyone with a huge 2005 crop, and the wine business found itself once again swimming in wine.”

Will the industry manage to siphon the wine from the swimming pool into the glass?

For now, wineries–both large and small–seem upbeat about having all that extra product on hand, despite the extra cost outlay for coopers, bottles, manpower, etc. Peter Mathis predicts that, with the help of customer-friendly pricing, it will only take the industry three or four months longer to sell through the 2005 vintage than ordinarily.

For exclusive, high-end wineries, the harvest is a boon. Steve Devitt, the winemaker at Darioush, a boutique Napa winery producing about 10,000 to 12,000 cases of wine per year, explains that the winery is still growing into its demand. He terms the large harvest “serendipitous,” because he’ll be able to increase supply to the brand’s clamoring markets. He indicates why the winery enjoys partial insulation from market swings, saying, “This area is based on luxury and prestige. Those are stabilizing components, because the demand exceeds the supply.”

A lot of larger wineries opt to send wine to Europe, rather than glutting the American market and causing wacky price fluctuations that would be hard to fix later. The European wine market has a high demand for wine but has traditionally been unwilling to spend too many Euros buying imported wines. Some European countries have therefore turned into an easy dumping ground for wineries that need to make room and sell unlabeled containers of wine at or below cost. However, partly because of the weak dollar that makes it so painful to travel over there now, U.S. wines are poised to grow into the second largest wine import in Britain, California’s largest export market. The results of the high-quality 2005 harvest will most likely show well across the pond, and may eventually increase demand for California wines all over Europe, depending on brand-building efforts.

Seen throughout the industry as a “hiccup,” the 2005 grape glut will certainly have other effects on the future. Traditionally, yields tend to be smaller the year after a big harvest, since the vines themselves are still recovering from their strenuous workout. That, coupled with the right weather conditions, could translate into a small 2006 harvest, which would help balance out the 2005 excesses.

Bill Turrentine, in fact, warns of an impending shortage. “This huge harvest may deceive many people, leading them to believe that excess inventories will be with us for a long time. But pretty soon the problem facing the California wine business will be insufficient supply. While a little bit of shortage is good, the wine business always goes to extremes. When folks finally become convinced that grape supply is insufficient, it still takes roughly four years for newly planted vineyards to begin yielding a commercial harvest. In the meantime, imports move into price points vacated by California wines. We are unlikely to ever recover that lost market share.”

On the other hand, Nick Frey, executive director of the Sonoma County Grape Growers Association, cautions that the lack of new crush capacity, along with vineyards that yield more than they historically have (thanks to drip irrigation, new trellis set-ups and new technologies), could spell more surpluses down the road. “This is probably not the last 200,000-ton harvest that we’ll see,” he says, speaking by cell phone from his truck as he drives to a meeting. “This was one of those bittersweet harvests,” he adds. “It was really sweet to have a good one, but now we have to work off inventory. We might not rebound as fast as everybody was hoping.”