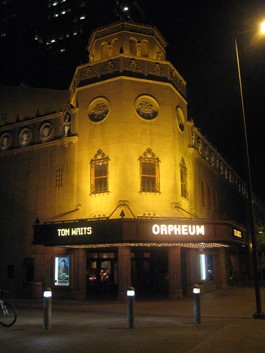 My friends and I have a running game in which we submit the most profanely ridiculous circumstances under which we’d see our favorite bands. “If there was a Jawbreaker reunion,” we ask each other, “but it’s in the middle of a jungle in Guam, accessible only by rusty machete, and they’re only playing four songs and tickets are $600, would you go?”

Time and again, the artist who always wins in the zaniest scenarios is Tom Waits. And so it was last week that a friend and I embarked on the obsessed fans’ journey to Phoenix, Ariz., where the temperature was 115 degrees, to join the fellow faithful who’d been lucky enough to score $100 tickets. No machetes necessary!

There are few artists I will travel such lengths to see, and the irony is not lost on me that the one at the top of the list lives a bike ride’s distance from my house. But the denim-clad Tom Waits that locals see digging through nails at Sebastopol Hardware is a completely different figure after donning the suit and taking the stage, and the transformation goes deeper the further from home he tours. No one in Phoenix, for example, could cite his regular coffee order at Flying Goat, and with an enigma like Waits, that’s a good thing.

We cruised the Orpheum Theater during the show the night before. A young couple inched down the alleyway, placing their ears up to each door in hopes of hearing any traces of the magic being conjured inside. A blonde girl pleaded with the box office, trying desperately to beg her way in. And on the sidewalk, so fittingly out of place, two ramshackle street musicians warbled a torturously off-key duet of “Sentimental Journey” to the empty night.

Our tickets, acquired through tenacity and dumb luck, were for the second night, and it was a chore to walk around town the next day and avoid hearing discussion of the previous night’s show. At record stores, junk shops, diners and bars, we continually had to ask people to please not tell us anything. “I’m gonna ruin it for you!” threatened a guy at the bar. “Tom Waits performed, and he was there for the whole night!”

Throughout the city, places were either shut down or, at the least, feeling the presence. One store greeted us with a sign explaining why the doors were closed: “Sorry man, it’s Waits. Come back tomorrow at 11am.” No other explanation needed.

A couple hours before the show, we entered an overflowing Irish pub a couple blocks from the theater. “Cold Water” was on the jukebox, and clusters of strangers toasted the Waits tour acronym when their beers arrived: “PEHDTSCKJMBA!” We shared a table with a couple who’d bought scalped tickets to the show the night before–very back row, in the balcony, $500 each. They told us they would’ve paid $1,500. The first dance at their wedding was “Take It with Me When I Go.” My wife and I danced to “Time,” I tell them, and our bond is instant.

It’s not much of a stretch to call the Waits crowd a congregation. The guys dressed like him–bowler hats and vests–and the girls clung to them in vicarious longing. People toted LPs of Heartattack & Vineand Mule Variations, hoping for an autograph. Once in line, they moved swiftly inside, despite Waits’ insistence on anti-scalping measures requiring everyone to produce their credit card and ID at the door.

As for the show–you can read reviews of the show anywhere online, including my own–it was utterly captivating. I slept under the escalator of the Phoenix airport later that night for a 6am flight back home, remembering that the last time I had slept on the floor of the Phoenix airport was to get home in time to catch Waits at the Raven Theater in 1996. During the fitful rest, a strange, whispery dream kept entering my head of an undefined figure in the mist, a metaphor for the night before.An atmosphere rather than a performance. Worlds rather than songs. A transfixion rather than a concert.

So let’s continue the crazy game my friends and I have. I know it’s nuts to fly 800 miles to a scorching desert and sleep on the floor to see Tom Waits, but man, that’s nothing–I’ve got tickets to the show in Dublin, Ireland, next month. Stay tuned.

To read the Phoenix review, go to .