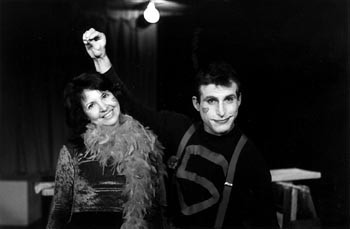 IN AN EFFORT to remind practitioners of Christmas that the holiday wasn’t invented by Hallmark, River Repertory Theater (under the direction of Lee Meryl Senior) has dusted off Godspell–rock-‘n’-roll evangelists’ John-Michael Tebelak and Stephen Schwartz’s flower-child, musical riff on the Gospel According to St. Matthew.

Unlike its predecessor, Jesus Christ Superstar (the gospel according to Andrew Lloyd Webber), Godspell recontextualizes the story of Christ into 1960s counterculture. Director Senior, however, takes it further by presenting Tebelak and Schwartz’s merry pranksters as a seriocomic pack of homeless persons kvetching and revering their God’s word in the present.

Though devised as an ensemble piece, Godspell‘s story is predicated largely upon the relationship realized between Christ and that ne’er-do-well disciple Judas (Ross Foti and Morgan Spector, respectively). Other apostles embark on various roles–generally dramatizing parables narrated by Foti or executing musical numbers with varying degrees of ability.

Saviors as a rule are commonly depicted as demure, well-mannered, and pedantic–and Foti minds these rules. He gushes didactic, patronizing rhetoric with the pantywaist, goody-two-shoes fervor of a Girl Scout hocking cookies for a good cause. Surely, playing Jesus is a perilous endeavor, and one is moved to absolve Foti’s performance on this score–10 Hail Marys after each show should do it.

Likewise, Spector’s Judas is an indigent milksop so addled by his guilt for betraying this Girl Scout that his character’s motivation is lost in a ruthless deployment of adulatory expressions and gnashing grimaces.

Not all is lost, however, as Foti and Spector are superb in the comic soft-shoe duet “All for the Best,” a feast of stagey one-up-manship deftly choreographed by Cabernet Lazarus. The scene is magical despite Spector’s tenor often being smothered by Foti’s baritone.

The Godspell cast meet the challenge of the tunes and concede defeat without a hint of acrimony. Notes go flat–but zealously. Harmonies diverge toward dissonance–but with real spirit.

Senior and Andrea Van Dyke’s costumes defy the director’s vision of a homeless cast. The players’ motley apparel, culled from the recesses of west county closets, are bright, convivial, and utilitarian (kneepads?). Spector’s sleeveless, tailed tuxedo jacket, muscle shirt, and fingerless gloves are more evocative of an early ’80s break-dancer than a chap down on his luck. Foti may as well be Supermime, in his white-face, suspenders, and a black shirt emblazoned with the Man of Steel’s iconic logo.

Suffice it to say, the players do not look homeless–they look clueless: the stage teems with leg warmers.

Senior’s set offers a sparse impression of urban degradation replete with cyclone fence skirting the upstage and sawhorses and planks that can be arranged into benches, altars, and slides. With the addition of a couple of painted wooden cubes and glistening new garbage cans, the set is more reminiscent of a dispossessed school playground than a homeless encampment.

River Rep’s Godspell deserves merit if only for its earnestness, sincerity, and heartfelt ardor, but the show, alas, is severely flawed. It’s a God-eat-God world.