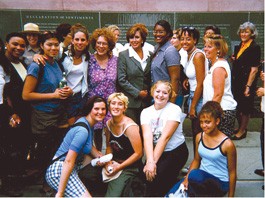 In many American schools, the history lessons go like this: Old white guys show up, fight against and later make up with Native Americans before creating a yummy Thanksgiving dinner together. Then they build an empire with the help of African slaves. Finally, some laws are passed, everyone is equal and they all ride off into the sunset together. The end. What is missing from this story? Aside from the fact that we, as a nation, are still leaps and bounds from celebrating true racial equality and democracy, what’s missing is the story of the American woman.

Over 10 years ago, Sebastopol filmmaker Louise Vance discovered a flyer in her mail about the 150th anniversary of the Seneca Falls Convention. A native of New York, this educated feminist was shocked to discover that the story of this crucial moment in the women’s suffrage movement struck no chord of familiarity with her. Shortly thereafter, she found herself accompanying WOWER Power, a girl’s Bay Area high school theater group (and one 10-year-old boy), to the event. They went to perform, she went to make the documentary film Seneca Falls.

Seneca Falls is not a lifeless, black-and-white collage of images featuring women from long-ago in lung-constricting Victorian dresses, but rather the tear-jerking, personal story of the frustration and empowerment that comes to the young women in the film when an omitted, collective history of our country is revealed to them. In 1848, Seneca Falls was the site of the first women’s rights convention. Some 150 years later, the WOWER Power group traveled there to learn about that time and to craft their own theatrical piece based on this fresh slice of history.

In addition to introducing us to the young women and their gradual transformation over the course of the road trip back east, the film also paints an appropriate and necessary image of such badass, radical women as Elizabeth Cady Stanton, Lucretia Mott and Sojourner Truth and the often dangerous risks they took for women to have the rights women enjoy today.

“I want to write women back into the fabric of American history,” Vance says of her film and the curriculum she is developing for classroom use around the nation. For her first independent film after directing programs for CNN and TBS, Vance was careful about leaving out the struggle for women’s reproductive rights, in order to appeal to women across religious and political lines. She was also conscious about drawing attention to the role that men played in securing women’s rights.

KRCB TV Channel 22 is sponsoring the North Bay premiere of the film in advance of co-presenting it to PBS stations across the country and in conjunction with March’s Women’s History Month celebrations. KRCB CEO Nancy Dobbs will discuss the film after its screening with Vance and members of the WOWER Power team.

With an original score composed by Mark Orton of Tin Hat Trio fame, appearances from radical women like U.S. Congresswoman Barbara Lee and the extraordinary insights of a 10-year-old boy about the future of Girl Power, Seneca Falls may soon be mandatory viewing in classrooms across the country.

Cheer Up, It’s Going to Get Worse