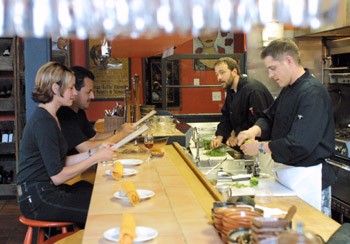 Girl and the Gaucho

Counter insurgency: Service is fast and friendly at the Girl and the Gaucho, and the food is an exotic, flavor-crammed blend of Spanish and Latin influences.

Girl and the Gaucho dishes up luscious Latino fare

WHEN GIRL and the Fig proprietor Sondra Bernstein schlepped her entire Glen Ellen-based restaurant up Highway 12 to expand and reopen in Sonoma, she knew the original space was a winner and vowed not to give it up.

The artsy proprietor had her crew paint and deck out the space pumpkin orange, black, and watermelon. She unearthed her collection, amassed over several years, of Spanish knickknacks. Little treasures like bullfighters painted on black velvet, and ceramic flamenco dancers.

Bernstein trolled Ebay for decorative colored-glass lanterns, which she bought and strung at different levels throughout the dining room. She stuck rows of lighted religious candles along the windows. And finally, she dressed a Barbie doll as a matador and nailed her to the women’s restroom door.

And olé! the Girl and the Gaucho was born.

From the street at night, the restaurant looks warm and inviting, all glowing lights and shady corners. On this warm spring night, the black-clad waitstaff rush to install us at a cozy table. Someone brings a complimentary dish of fried spiced almonds and a taste of amontillado sherry. Someone else sets down a basket of Mexican soft rolls made with anise and molasses.

The cuisine is an exotic, flavor-crammed blend of Spanish, Mexican, Chilean, Argentinean, and Brazilian dishes. John Toulze, chef at the Girl and the Fig, also oversees the kitchen here. The tapa-style “small plates” include paprika potatoes and sherry onions ($5), rabbit confit with quinoa slaw ($10), and paprika prawns with tequila lime mojo ($10).

The tomatillo guacamole and fried yucca ($8) has a bright zing from the tomatillos, which liven up the creamy avocado. Another winning combo is the cod and corn cakes ($10). This dish features two separate crisp savory cakes. The corn version is bursting with whole kernels. The cod cake, made with fish cured on-site, has a pleasing saline bite.

One of the best dishes is a refreshing but simple salad made with hearts of palm, jicama, and avocado ($10). The coolly pleasing mix also features sweet bites of fresh papaya and a pumpkin seed vinaigrette.

But the Girl and the Gaucho’s real forte comes with the ingenious design of main courses.

A pan-roasted half chicken gone Argentinean is a generous portion of garlic-scented chicken with roasted potatoes, sherry onions, braised greens, and chimichurri (a thick fresh herb and onion sauce).

For dessert, a trio of miniature custards ($6) really hits the sweet spot. The dish features two tiny pots of custard–one flavored with lush mango, the other with Spanish chocolate brushed with cinnamon–and a tiny flan with a caramel glazed top.

The wine list is terrific, with loads of little-known Spanish, Chilean, and Argentinean offerings along with the California choices. Several good selections are a bargain at $18 a bottle. Wine flights are also offered.

A slight gripe: the choice of music played on the sound system. On two occasions typical bar-scene rock pounded forth–and how I pined for a little Brazilian samba or Spanish guitar to heighten the Latin mood.

Still, whatever Bernstein does, she does con arte.