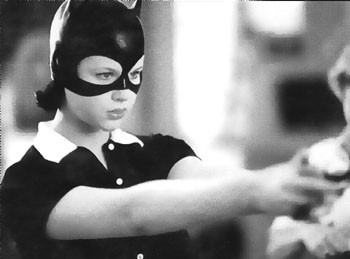 WHEN HOLLYWOOD goes running to the world of comic books for ideas, it’s usually a very bad sign. Most creative marriages between the silver screen and the “graphic novel” result in exactly what you might expect: pure crap. Think Batman Forever. Think (oh god no!) Howard the Duck.

But your thinking may be about to change. A film is headed our way that some critics are already calling the perfect high-IQ antidote to a summer filled with brainless blockbusters. And it’s adapted from one of the most popular alternative comic books on the shelves.

Ghost World, which jumpstarts a month of offbeat flicks at the Wine County Film Festival, is no super-hero slugfest. Forget those muscle-bound goofballs strutting around in tight costumes. The main characters in Dan Clowes’ graphic novel, published by Fantagraphics, are two eccentric young women who have just graduated from high school and are wondering what to do with the rest of their lives.

In the film, the pair are played by Thora Birch (of American Beauty fame) and Scarlett Johansson. Indie film stalwart Steve Buscemi co-stars. The creative duo behind the project is hard to beat: Dan Clowes teamed up with Terry Zwigoff (director of Crumb) to write the screenplay, and Zwigoff directs.

The result is big-screen magic, at least according to the few critics (including Peter Travers of Rolling Stone) who have seen it. Ghost World opens around the country on Aug. 3, but North Bay residents can catch it on Thursday, July 19, when the film screens at 7 p.m. at the Sequoia Grove Vineyards in Rutherford. Admission is $20.

Of course, the Wine Country Film Festival has more to offer than just Ghost World. Now in its 15th year, the festival has made a name for screening an offbeat assortment of features, shorts, and documentaries from around the world, with a strong emphasis on politics and social commentary. This year’s festival offers scores of films from around the world, beginning with screenings July 19-29 in Napa County and continuing Aug. 2-11 in Sonoma County.

Big names and famous faces are another distinguishing trademark of the festival. Last year, it was Richard Harris. This year, it’s Nobel Peace Prize winner José Ramos Horta, who will be appearing before the screening of the film The Diplomat.

The Diplomat, which screens Aug. 8 at 9 p.m. at Jack London State Park, is an Australian documentary focusing on Horta and his efforts to bring an end to Indonesia’s bloody occupation of East Timor. It’s a fast-moving, compelling film featuring an irresistible David vs. Goliath struggle and a very human figure at its center. Horta is a passionate advocate for his beleaguered homeland, but he’s also a colorful character with a salty vocabulary and a flair for the dramatic.

Talent from abroad is a mainstay of the festival. For instance, Polish filmmaker Jarek Kupsc appears in person to introduce Recoil, a gritty story about a mercenary from the Bosnian war who settles in San Francisco under false pretenses. The film screens Saturday, July 21, at 4 p.m. at the Native Sons Hall in St. Helena.

Filmmakers from Northern California are also well represented. The Last Stand, a documentary from San Francisco filmmaker Todd Wagner, screens Aug. 4 at 7 p.m. at Jack London State Park. And Exodus to Berlin, a documentary about Jewish immigrants in Germany co-directed by Bodega Bay resident Peter Laufer, screens Aug. 5 at 3 p.m. at the Sebastiani Theatre in Sonoma.