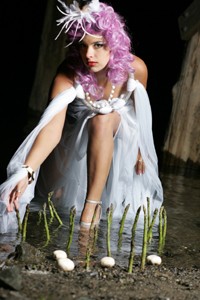 ‘It’s the single biggest threat to Sonoma County today,” begins a radio commercial about the bill banning genetically modified organisms (GMOs). It goes on to say the ban will have a “crippling effect on agriculture, the backbone of our economy,” thereby “accelerating urban sprawl.” The ad is sponsored by the Sonoma County Family Farmers Alliance (FFA), a group created by the Sonoma County Farm Bureau to defeat the measure.

In November, voters will decide whether to ban the planting of genetically engineered crops for the next 10 years. At this point, the campaigning seems to have settled on bringing the agricultural community over to one side or the other. But since the long-term effects of this largely untested technology are unknown, farmers seem more divided on the issue than ever before.

Kathy Tresch of Tresch Family Dairy, for example, supports the ban because, as an organic dairy farmer, she is concerned GMOs might contaminate her pastures. “Some GMOs actually say don’t mow this lawn because it won’t grow back,” she says. “If something like that cross-contaminated with our pastures, it would void our pastureland. Is that going to happen? Probably not, but the chance of it happening would have a huge impact on us.”

On the other hand, Ed Grossi of Sweet Lane Nursery in Santa Rosa feels the ban could deny access to technological advances that might aid his business. “It would put us at a competitive disadvantage,” he says. “It could keep us from buying plant material that has been altered when other counties can, making an imbalance in the marketplace.”

Earlier this year, GE-Free Sonoma County collected a record 45,000 signatures to get the bill on the ballot. They claim that the FFA’s campaign isn’t as grassroots as the organization’s name implies.

“We are concerned about the misleading statements by the so-called Family Farmers Alliance, which is really the Sonoma County Farm Bureau and biotech companies,” says campaign director Dave Henson.

When a GMO ban was placed on the March 2004 ballot in Mendocino County, biotech lobbying groups such as CropLife America (a front group for Monsanto and other biotech corporations) spent more than $600,000 to defeat the measure. The ban passed in part because Mendocino County residents resented outsiders telling them how to vote.

“With the Mendocino campaign, the biotech companies irritated voters,” says Henson. “So in other campaigns, they have been getting better at concealing contributions. It’s hard to trace where the money comes from.”

But Lex McCorvey, executive director of both the Farm Bureau and FFA, denies that they are receiving funds from the biotech industry. “We get no money from Monsanto or any companies like that,” he says. “With this issue, we recognize the need to run a grassroots campaign.”

Along with a $50,000 donation from the Farm Bureau, the FFA has received endorsements from the Sonoma County Grape Growers Association, Sonoma-Marin Cattlemen’s Association, California Farm Bureau Federation, and Western United Dairymen, among others.

Although organic food is required by law to remain free of GMOs, the FFA says organic farmers should simply avoid planting GMO products to protect their label. Henson, however, calls this an “outrageous claim” because it ignores the threat of contamination.

“If you are contaminated by someone else’s farm, you don’t lose your organic certification, because that’s blaming the victim,” he says. “But it puts pressure on organic growers to sell contaminated crops. They are also not allowed to save their seed for next year after contamination, which could put them out of business.”

McCorvey acknowledges that organic farmers can’t use contaminated seed, but that doesn’t matter in today’s marketplace. “Virtually no one saves seeds to replant,” he says. “Farmers just don’t do that–most buy the newest and latest seeds.”

He adds that the ordinance could cost up to $250,000 per year to enforce. GE-Free claims that the only ones who will have to pay anything are farmers who violate the ban, since they will have to remove the illegal crops and pay a $1,000 fine.

Between eight and 12 ranchers grow genetically engineered corn in Sonoma County. Should the ban pass, they will have to plant non-GE corn next year instead.

The GMO initiative probably won’t affect Sonoma County’s biggest crop, grapes. While a grapevine resistant to Pierce’s disease is being developed, it may be 10 years or more before it will be available for sale.

Steve Dutton of Dutton Ranch Corp., which grows 1,300 acres of grapes and apples, is against the initiative. “I think it’s poorly written,” he says. “It takes away our choices. If wine grapes were ever genetically modified, we couldn’t plant them, and that business would go to Napa Valley instead.”

On the other hand, George Davis of Porter Creek Vineyards feels that GE grapevines could hurt trade, since many countries will not buy GE food.

“Big corporations like Monsanto are trying to shove these technologies down our throats, but that doesn’t work too well with luxury items like wine,” he says. “Wine is often a matter of perception. Using GE grapevines could cause a negative perception in the way the world looks at California wine.”

The GE-Free initiative expires in 10 years and can be overridden by a unanimous vote by the Sonoma County Board of Supervisors. For example, if Pierce’s disease struck local vineyards and a GMO strain resistant to the disease was available, the supervisors could undo the ban.

“No biotech company would want to build a level 3 lab here when it is not required anywhere else in the world,” says McCorvey. “There’s no way they would want to come here.”

Regardless, GE-Free Sonoma County insists that there needs to be more emphasis on the costs of not passing the ban.

“The fact is, if we don’t put a memorandum on GE crops, we will lose our organic label, GE salmon will overrun our wild salmon, and we will lose our ability to export our crops to many markets–our wonderful cheeses and wines,” says Henson. “The time to decide about these issues is now.”