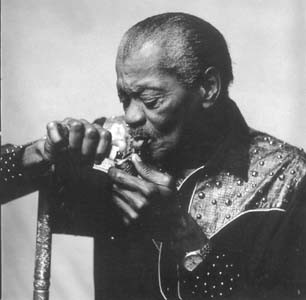 ‘Gatemouth’ Brown has plenty of bite

HE’S ONE OF A KIND–a pipe-smoking Texas musician with roots in the Louisiana swamplands, a savvy swing king equally at home with guitar, fiddle, or harmonica, a musical innovator who deftly blends blues, western swing, country, jazz, and Cajun sounds.

Guitarist and singer Clarence “Gatemouth” Brown, 75, hasn’t had a hit in 50 years, but he’s more popular than ever. He is a seven-time Grammy nominee, a multiple winner of the prestigious W.C. Handy Blues Award, and a recipient of the R&B Foundation’s highest honor, the Pioneer Award.

But Brown isn’t jumping on the swing bandwagon–he damned near invented it.

It was the large-ensemble format that launched Brown’s recording career in 1947, and earned him such hits as “Okie Dokie Stomp,” which showcased his stinging, syncopated guitar lines with suave big-band accompaniment. If you detect a degree of showmanship in Brown’s act, it’s no accident. His first gig was with such swing/vaudeville outfits as W. M. Bimbo and his Brownskin Models and Howard Spencer and the Gay Swingsters.

Born in 1924 in Vinton, La., and raised on a ranch in nearby Orange, Texas, Brown shaped his musical approach in the setting of his rural surroundings and under the keen tutelage of his father, who played guitar, fiddle, and piano. “But my dad did not play the blues,” Brown says. “I grew up on Cajun music, country, and bluegrass. I didn’t know anything about blues until I was a teenager. Even today, some people make the mistake of categorizing me as a blues musician. I do play the blues, but in a positive way, and as just one of my many styles.”

His first big break came in 1947 when a then-young Brown sat in at a Houston nightclub for an ailing T-Bone Walker. “I bulldozed my way onto the bandstand, picked up a guitar, and made my debut right there.”

A management contract with nightclub owner Don Robey and a Peacock Records contract followed. But the road to fame hasn’t been easy. Brown had to struggle for years to free himself from Robey, who took songwriter’s credit for many of Brown’s songs.

These days, Brown tours seldom. “I’m backin’ down a bit, man, it got to me,” he recently told Billboard magazine. Meanwhile, the show is a chance for a new generation of swing fans to catch a Texas original. “Hopefully, we’ll have a chance to make sure that some younger people get to hear this,” Verve executive David Neidhart says.

“I think the guitar playing will blow people away–how interesting and unconventional a lot of what he does is.”