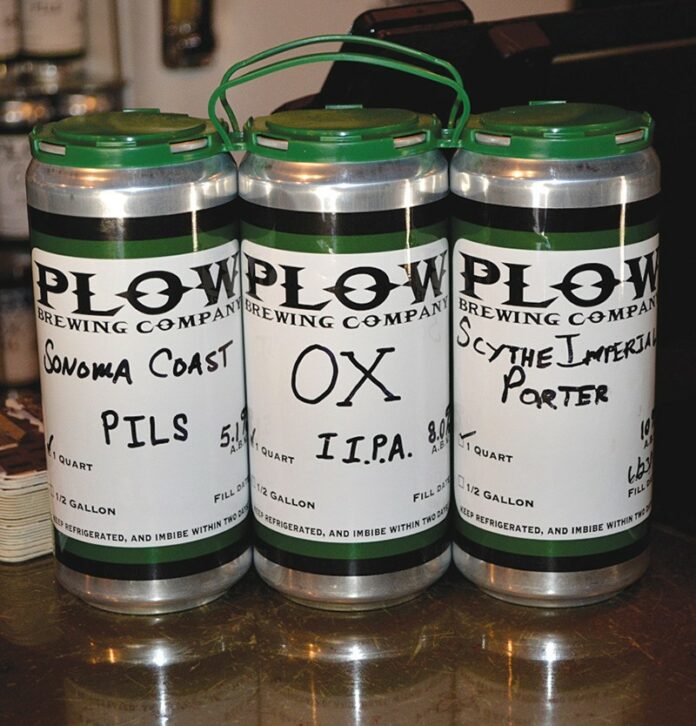 When UC Davis–trained brewer Kevin Robinson left a brewing job at San Francisco’s Speakeasy to work at a St. Helena winery, he aimed to learn more about using wine barrels, which were becoming increasingly important in the craft-brew business. But he found a key insight for his current business a little further down the bottling line: wine has a better presentation than beer.

“I mean, literally,” says Robinson, “some of the best beers in the world have cartoons on them.” So he designed the packaging for his Belgian-inspired Divine Brewing beers (“Vintner’s Brew,” April 4, 2012) so that they’d look good on a white tablecloth, and they’re only sold in bottles through distributors that regularly deal in wine.

While his Divine beers may hold a nose to the firmament, Robinson’s newer Plow Brewing Company is squarely planted in terra firma. Plow beers, canned on-site at the Santa Rosa taproom, are meant to be plunked on a rusty workbench, says Robinson.

A tour of Robinson’s brewery reveals that it’s almost as much workbench as brewery. His mash tun, for instance (where cracked barley is steeped in hot water to release its sugar content), is an ingeniously converted self-dumping hopper. His fermenters are dinged-up old dairy tanks. And the heat exchanger is a hand-me-down from a Gatorade plant. A tinkerer and fix-it guy, Robinson got all of these to work for his purposes.

Waiting in the corner is his surprise salvage score: Russian River Brewing Company’s former 50-barrel brewing setup, which was, in turn, purchased from Delaware’s Dogfish Head Brewery. Robinson says he knows how to optimize the old tanks: after all, he operated the setup as a brewer for Russian River Brewing for three years.

Now, all he needs are those barrels.