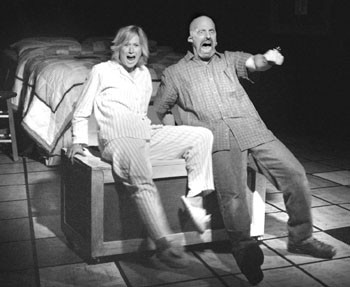 Past is imperfect in spooky ‘Fuddy Meers’

AN ALARM clock rings, and a woman sits up in bed. She doesn’t know where she is or how she got there. She doesn’t recognize the smiling man who comes to turn off the alarm. In fact, she can’t remember anything, including her own name.

This is Claire, the amnesiac heroine of David Lindsay-Abaire’s Fuddy Meers, and this is how she begins each morning: with her mind wiped clean of memories, needing to be reintroduced to her husband, her son, and herself. Whatever she manages to learn over the course of the day vanishes as soon as she falls asleep, and the next day she starts from nothing again.

“So every morning we have the same conversation?” Claire asks her husband, Richard. “I change a word here and there,” he answers, “but it’s mostly the same. Sometimes I don’t admit that it’s annoying.”

The fast-paced, darkly funny Fuddy Meers, directed by Joe Winkler, opens the 18th season at Actors Theatre with a bang. The AT designers have achieved a striking visual impact, from Sheri Lee Miller’s aptly chosen costumes to the cartoonishly spooky set by Brian Bartlett.

To write in any great detail about the plot of this edgy comedy would be to give away its surprises, and surprise–whether of the amusing or the disturbing variety–is at the heart of the play’s appeal. Suffice it to say that almost nothing is what it seems to be, and as Claire draws closer to the truth of her violent, murky past, she discovers that the persons she encounters each harbor dark secrets of their own.

The casting is excellent across the board, with each performer well suited to his or her role. Danielle Cain plays Claire straight, as an Alice lost in a dysfunctional Wonderland. R. Scott Wagman is Richard, her pop-eyed, relentlessly cheerful husband, and AT newcomer Steele Faulkner plays Kenny, her surly, pot-smoking son.

After she is whisked away from home by a limping, lisping man with a deformed ear (the superbly funny Larry Tomlinson), Claire finds herself back in her childhood home with her mother, Gertie (Joan Felciano), a stroke victim who now speaks only in malapropisms. “Claire,” for example, comes out as “clay,” and “breakfast” is “fast break.”

As with everything else at first, Claire regards her mother’s stroke-language with spacey acceptance, so that when Gertie refers to freebasing cocaine as “base freeze croquet,” Claire responds: “I love croquet. . . . I was always the blue ball.”

Along for the ride are a hard-bitten policewoman (Heather Siglin) and a foul-mouthed sock puppet named Binky, the alter ego of mild-mannered Millet (Dodds Delzell).

Claire’s quest for self-discovery is impeded by this motley crew, most of whom have a vested interest in keeping her in the dark. “Would someone give me one piece of truthful information?” she shouts. But Binky’s profanity-laced outbursts, which sometimes contain valuable information, are quickly repressed by Millet, and Gertie, though she tries to help, is mostly unintelligible.

The truth, when it comes, is all the more poignant because we know it will be forgotten the next morning. Like a funhouse mirror, Lindsay-Abaire’s dialogue makes us laugh at its warped reflections–before it tilts to reveal the not-so-funny source.

As a metaphor for the distorting nature of memory, and as a doorway to the new season at Actors Theatre, Fuddy Meers is downright entrancing.