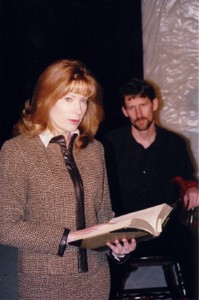 For a comedy, Stuart Swabacker’s new one-act play Frythescum.com gets off to a fairly grim beginning. A man clad entirely in black, including a black hood, is bound with strips of a torn red sheet to a chair placed at center stage. The play has yet to actually start, and as audience members take their seats in the small, intimate Black Box at Actors Theatre in the Luther Burbank Center, the man twitches nary a muscle. He could be a Guantanamo Bay prisoner, or perhaps the victim of a bondage experiment gone awry.

As it turns out, he’s a theater critic who’s been kidnapped by a group of actresses fed up with his snarky reviews and unethical practices. Seeking revenge, they’ve decided to put him on trial for his crimes, in real-time on the Internet. As a critic assigned to review Frythescum.com and the only person in the audience holding a notebook, I’ll confess to feeling more than a little self-conscious during the course of this frolicking farce.

Fortunately, theater critic Garreth Hunt, played by Ron Bartels with animated, arrogant anxiety, is much more of a scum than most of us. For years, his reviews have relied on the same formula: If the actress sleeps with him, the play gets a good review. He doesn’t remember their faces, just their breasts. After he awakens to find himself a captive, he constantly intones a mantra, “Perceive! Ascertain! Plan! Respond!” as if the power of positive thinking might make it all go away.

But making his mysterious tormentors go away isn’t going to be easy. On stage, the group of actresses Hunt has maligned over the years is represented by the sexy and determined Beverly Bartels, a past victim who has become the judge, jury, and executioner for this trial.

A laptop computer on a card table set up on the left of the stage keeps track of the online viewers; a projection of the laptop’s screen on a backdrop to the right keeps the audience informed. Swabacker uses this interactive element to play with the audience’s emotions in what are the play’s most successful passages.

For instance, when Hunt points out that the ratings for the trial are dropping, Bartels (Hunt calls her “Perky,” but her character’s name is kept secret until the end of the play) begins stripping out of her prim businesswoman’s attire, revealing a leopard body suit underneath. Naturally, the ratings, and the heart rates of at least the male members of the audience, shoot up. When the ratings flag once again, she whips out a carving knife and holds it to Hunt’s throat. She knows sex and violence will keep viewers logged on, and Swabacker knows the same holds true for theater audiences.

Married actors Ron and Beverly Bartels are perfectly cast here; the sexual tension between them is exquisite. Swabacker’s dialogue is sharp and witty, dragging only when it explains the more technical aspects of the online trial software. Without giving the ending away, the fact that the somewhat surprising climax disappointed me says a lot more about my tastes for blood and lingerie than it does about the play. In this manner, frythescum.com becomes much more a commentary on our own cultural values than a tirade against corrupt critics. That’s what makes it worth seeing.