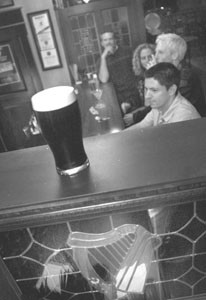 Eyes a-Smiling: Finbar Devine’s, with some help from the Guinness corporation, is spreading Irish goodwill through the North Bay.

How authentic is the North Bay’s newest ‘authentic’ Irish pub? And, ahem, how authentic would we really want it to be?

“There are two kinds of Irishmen: the standard Irish, and the toothless Irish,” jokes Patrick Ball, famed Celtic harpist, playwright, and storyteller, smiling amiably as he quietly tells stories at a corner table at Finbar Devine’s Irish Pub in Petaluma. Ball’s wife, English-born landscape artist Susan R. Ball, laughs at the toothless observation and encourages Patrick to tell about the elderly Irish gentlemen he met while visiting Ireland to do research for his play, The Fine Beauty of the Island. Patrick pushes back his bowl of beef and Guinness soup, and describes the tiny town of Quilty, in County Clare.

“It’s a really malodorous little town,” Ball says. “When the tide is out, the effluvia of the town washes out into the bay, and it stinks. One day I was outside the pub, and I spotted this ancient guy in a wheel chair, lurking in the darkened crack between the pub and the next place.”

After starting up a conversation with the aged chap (and, yes, he was largely toothless), Ball invited him inside the pub–a simple, uncomplicated, half-decaying place–for a pint of beer, a couple of sandwiches, and a lively conversation. The old gent died the next year.

“Every pub in Ireland,” says Ball, “has a guy like this, these wonderful, ancient people existing on horrible diets of Guinness and cigarettes. I suppose such folks are part of the mystery and legend of the authentic Irish pub.”

Ah, the Irish pub. Whatever else it is, it is a thing of legend. Just the mention of those two words, “Irish” and “pub,” causes a curious set of pictures to arise in the mind, like Brigadoon leaping from the mist. Though Brigadoon, of course, is in Scotland, not Ireland, and unlike an Irish pub, chances are good you will never, ever find yourself in the fictional Brigadoon. “Authentic” Irish pubs, however, have become as common as potholes in Petaluma.

From Ireland to Italy, from Austria to Turkey, there are few spots on the map that haven’t been touched in some way by that old Irish pub magic. If you believe certain pub-honoring entertainments–Joyce’s Dubliners, John Ford’s The Quiet Man, and Alan Parker’s The Commitments, you might think the Irish pub is part drinking hall, part meeting place, and part town hall, occasionally serving as a good place for a friendly fist-fight, concluded amiably with free whisky for all involved. Certainly, the new breed of “authentic” Irish pub that is springing up all over–Finbar Devine’s being the most recent North Bay addition–have based themselves on this vision (without mandatory Saturday-night brawls, we hope).

But which is more authentic, the comfy, whimsical pubs from the old John Ford movies, or the local places–Finbar Devine’s, the Rose in Santa Rosa, Connelly’s in Guerneville, Ruth McGowan’s in Cloverdale, and Murphy’s in Sonoma–not to mention the North Bay’s numerous English pubs, such as the Mayflower in San Rafael, the Pelican Inn at Muir Beach, and the brand-new Cock and Bull in Occidental?

“Most of the movies have it wrong,” says Patrick Ball, “and if they’re trying to replicate the old-fashioned pubs in Ireland, then the new Irish pubs like this one have got it wrong too–which isn’t really a bad thing, necessarily. Twenty years ago, and still a lot of times today, the pubs of Ireland were dismal and dark; they were dank, but with lots of good craik–that would be conversation. They’re places of mildew, smoke, and curling linoleum. By comparison, these new pubs are pretty spruce.

“If this were Ireland,” Ball adds, “there’d be a lot of dogs in here.”

The decor is typical of other modern Irish pubs, in that it boasts wall-to-wall Irish stuff, everything from paintings of men in kilts and photos of toothless Irishmen hefting pints of beer to shillelaghs, Guinness posters, and some enormous portraits of John and Bobby Kennedy. (“Where’s the picture of the Pope, then?” asks Ball).

According to Capurro, the decor was selected and shipped with the help of representatives from Guinness, which has over the years become a kind of Irish-pub midwife, assisting in the creation of dozens of new establishments with an Irish-pub theme. Though Capurro went the Guinness route, many newfangled pub owners have been aided by www.your-own-irish-pub.com, an informational website run by Gemmell Griffin and Dunbar in Dublin (the one in Ireland), a company that assists restaurant owners in setting up traditional Irish pubs in various non-Irish parts of the world. If it seems odd to create something authentic by stocking with items purchased on the Internet . . . well, it is.

Still, it’s impossible to enter Finbar’s and not know you’re in an Irish pub. The place is nothing if not Irish. That said, the exuberant, pointed anonymity of the interior design suggests an Irish pub as designed by Imagineers at Disneyland.

“All the stuff on a pub’s walls in Ireland would pertain to local stuff,” says Ball. “Local soccer matches, local concerts, local residents. There wouldn’t be so much anonymous stuff. Another thing. If this were a pub in Ireland, all of these paintings and photos would be so obscured by smoke you’d not be able to see what they were.”

“So you wouldn’t really want it to be too authentic,” Susan says with a laugh. “To be honest, if you took an actual authentic Irish pub from Ireland and popped it down in Petaluma–“

“No one would ever go there,” Ball finishes. “Truth is, a real Irish pub is not that savory a place.”

Take the food. According to the Balls, the food in Americanized Irish pubs, like Finbar’s, tends to be better than the food in actual Irish pubs.

“If you ask for a salad in a pub in Ireland,” Susan points out, “you’ll get something that’s pretty upsetting.” As for Finbar’s, the food items we’ve snacked on–shepherd’s pie, potato skins, that Guinness soup–get a thumbs up from the experts, though certain menu items, like hamburgers, for example, remind one that they are very much in America.

“And the beans are too good to be authentic,” says Susan, sampling a fresh, perfectly cooked, garlic-seasoned green bean. “In Ireland, these would be severely overcooked.”

“What is the Swahili word for ‘hello’?”

“What is Homer Simpson’s middle name?”

What the hell is going on here?

To conclude the evening, we’ve made our way to Murphy’s Irish Pub in downtown Sonoma to check out another example of the modern “authentic” Irish pub, but the place is so packed with pencil-pushing brainiacs–it seems to be Trivia Night–that we can’t find a place to sit. Even outside on the deck (“No pub in Ireland would ever have a deck,” says Ball), where wisps of acrid cigarette smoke lend a hint of authenticity to the Irish-pub theme, there are no empty tables.

Too bad. Murphy’s boasts some of the best fish and chips in the North Bay, and their mushy peas have become an offbeat culinary icon. Before deciding that Trivia Night is too much to reckon with this evening, Susan steps inside and takes a peek around. Like Finbar’s, the walls of Murphy’s are crammed with anonymous Irish kitsch.

“Extravagantly overdone,” she sums up.

Watching the well-dressed, mostly youngish clientele sipping ale and scribbling answers on pieces of paper, Ball suddenly hits on a way to introduce more authenticity to the North Bay’s Irish pubs. “They could call up a theater company,” he says, “and hire some emaciated, toothless actors to dress up in mismatched suits and lurk in the corners of the pub, being charming and weary and begging for a pint.

“Now that,” says Ball, “would be authentic.”