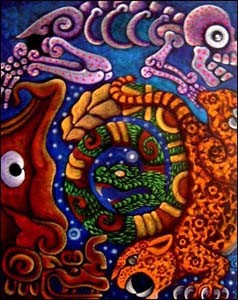 Day of the Dead

Altared States: The Petaluma Coffee Cafe hosts work by Ernesto Hernandez Olmos and a showing of ‘La Ofrenda: the Days of the Dead’ as part of Petaluma’s Day of the Dead celebrations.

For Better or Worse

As the earth continues its sinuous stagger around the sun, the harvest is gradually coaxed from the fields. The light becomes low and slants golden to the ground. The mornings start dark, the days end early. And just as October relinquishes itself to November, the veil between the worlds of the living and the dead is said to stretch, shimmer, and thin perceptibly.

On one continent, ancient Celtic worshippers believed the hours between Oct. 31 and Nov. 1 to be a time of spirit transmigration. Called Samhain (pronounced “sow-in”), this was a celebration of the new year, the cyclical split between the work of the outside summer and the reflection of the indoor winter. Turnips were hollowed and fitted with candles to beckon down the dead. Families feasted from house to house in joyful celebration of their ancestry. Resolutions were toasted, promises made. Today, most of us on this continent call it Halloween, and it generally involves ill-fitting plastic masks and the Hershey corporation.

But other North Americans feel that during this brief ethereal slimming, spirits–drawn down by the pungent scent of marigolds–also return to our mortal sphere. Shed of the load of the physical world, they visit with loved ones, enjoy the fragrance of their favorite foods, commune with candlelight, relish the colors and sounds, and once again whiff the palpable physical pleasures of this life so dear.

This is no macabre spectacle, no ghoulish sport, but rather it involves special sugar candies and fresh-baked cakes and all-night picnics and family reunions in a festival of skeletons, skulls, and dead folks. Called Día de los Muertos, or Day of the Dead, this Aztec-born tradition has gradually spread beyond Hispanic, primarily Mexican, communities to bloom into a cross-cultural celebration of the beauty of life as seen through the dark glass of death.

Or at least that’s how it has transpired for Petaluma resident Marjorie Helm, a parent who has suffered, with her husband Chip Atkin, the cruelest death of all–that of their only child. Just 11 years old in October 2000, their son Trey was at an outdoor birthday party when a tree limb shaken terribly free on a windy day instantly killed him.

The year before, Helm had organized a field trip of Trey’s fourth-grade class to visit the Day of the Dead exhibition at the Sonoma Museum of Visual Art. At the time of his death, she was busy planning that year’s excursion. “And,” she says, “it really made sense to go through with it.”

Helm also went to Santa Rosa’s A Street Gallery, which hosted a community altar that year, too. There, she found that someone had already placed a copy of the memorial literature from Trey’s funeral amid the photos and remembrances of others. Most uncannily, Luz Navarette, a friend of Helm’s sister who had helped to organize the exhibition, had set masses of marigolds grown by Helm and her son around the altar. Navarette had picked them before Trey’s accident; he was there in so many ways.

“The ritual was so comforting,” Helm says, making tea in her kitchen. “A little voice inside of me said we should have something like this at home, in Petaluma.”

So Helm, who has a background in mental health and works as a life coach, gathered the fortitude to go to the fledgling Petaluma Arts Council with the idea that they host their own Day of the Dead celebration. “The idea went over like a lead balloon,” she now chuckles. “I don’t think that people got that it was an opportunity for exhibition.” Encouraged by another council member, she went back the next month and pitched the idea again. This time she was met with a warmer reception.

Teaming up with the Hispanic Cultural Development Corporation and the Spanish-language outreach program at St. Vincent de Paul’s Catholic Church, Petaluma’s celebration is now in its third year. The Sonoma Valley Museum of Art in the town of Sonoma hosts this festival for its fourth year, working with the La Luz Center and local families to open this tradition to people of all nationalities.

According to museum director Lia Transue, the items placed on Day of the Dead altars all have particular meanings. The skulls, for example, symbolize the seat of intelligence, not decay. Water is offered to slake the thirst of the spirit’s journey; food is placed to unite a family again in the homely intimacy of the table. The color purple is for mourning; the color white, for the soul’s purity; yellow, for light amid darkness.

On a recent weekday afternoon, storefronts all around downtown Petaluma boasted small altars teeming with gaily adorned sugar skulls, bright paper flags, and comical folk-art skeletons busying themselves with such joyful activities as eating, dancing, or playing music. Apart from the town center, the Petaluma Coffee Cafe hosts the one-person exhibit of Oaxacan painter Ernesto Hernandez Olmos, and in the window of Copperfield’s Books downtown is a large and personal altar decorated with paintings and cartoons by San Anselmo resident Jaime Crespo.

Crespo, 43, seems the least likely sort of man to occupy himself with images of death. Yet such dichotomy is entirely in keeping with the spirit of the Day of the Dead. Standing in his bright record store in San Rafael, Crespo says, “I had aunts and uncles who [celebrated the Day of the Dead], but my cousins and I weren’t into it. We’d rather be listening to Stevie Wonder.” In fact, Crespo mostly rejected his Latin background, refusing to speak Spanish and imagining himself more closely akin to soul man James Brown than anything else.

But his ancestral culture slowly crept back in as he aged. Drawing a series of comic strips called “Narcolepsy Dreams” and putting out his own Numb Skull zine, Crespo became an icon, with such figures as syndicated cartoonist Keith Knight citing him as a direct influence. For the Petaluma exhibit, Crespo sketches the traditional smiling skeletons of lore, one being a self-portrait at the mic of KWMR, spinning that well-loved disc, “History of Mariachi Speedmetal Clog Dancing, 1930-1935.”

That kind of goofy humor is exactly what attracted Marjorie Helm to the celebration in the first place. “It’s really a chance for a minority culture, one in which there are less people than the majority, to share something of tremendous value,” she says. “Our own culture is so death-denying. But if you can look at death within the context of community, there’s so much lightness. You know, it’s a real paradox. It sets up the ability to laugh at death.

“What I’ve learned is that none of us gets out of here without having to suffer a really significant loss, and I appreciate that Day of the Dead celebrates that. And,” she says, settling on the couch, “it provides an opening for people to shed some light on an area that’s very dark and very scary for most of us.

“With Trey’s death, I realized how much loss everyone carries around with them all the time. And I stopped taking it personally.”

Helm, whose father was born in Mexico, began a family altar with his passing. Trey was fascinated with it and when other family members died, he urged her to keep adding to it. Today, the wood-burning stove in her living room is covered with flowers, a candle is kept burning within, and such objects as baby photos and small skateboarding figurines adorn it. She looks at it quietly.

As her involvement with the Day of the Dead festival has evolved, Helm says, “it’s gotten less and less about Trey and more and more about the cultural gifts we can give to each other. I’ve gotten so much joy from working shoulder to shoulder with people in different cultures.

“When you create in community, there’s a kind of magic that happens.”