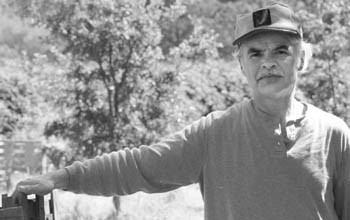 Forced Pesticide Spraying and the No Spray Movement

Why I plan to resist forced pesticide spraying

The last time I put my body in the way of the government was to stop the Vietnam War. I was a young officer in the U.S. Army and chose jail over killing people. Though it took years, we ended that war. As I prepare to defend my home and organic farm from chemical assault by the government in its attempt to control a tiny bug–the glassy-winged sharpshooter–that threatens grapevines, it feels similar. If put into practice, we will end forced pesticide spraying, as approved in November by the Sonoma County Board of Supervisors.

Civil disobedience is very American–going back to pioneering religious groups, such as the Quakers and Amish, which are both part of my own personal tradition. Martin Luther King Jr. and the struggle for racial justice continued that legacy. I met Dr. King during the l960s and was deeply inspired by him; he stimulated me to leave the military. But going to Cook County Jail during my 20s with hundreds of others after our direct action at the National Democratic Convention in Chicago is different from prison as a mature man in my mid-50s.

That struggle was in the streets, but this would be here at my home.

Outrage at the killing of other humans inspired my action against the Vietnam War. This time I feel sadness that people I know personally and have liked–including Sonoma County Supervisors Mike Reilly and Mike Kerns–would authorize the end of my livelihood as an organic farmer and threaten my health. At one hearing alone they heard testimony from over 60 people at a meeting of 300 people pleading with them not to spray. But they decided to protect the wine industry at all costs.

There was something very wrong with the Vietnam War, which Americans eventually came to realize. There is also something very wrong with the government coming to our homes and spraying deadly chemicals without our permission, which a growing number of people are coming to realize. The chemicals proposed to be used were developed as nerve toxins for wartime use against human enemies and are now used to fight insects.

The Sonoma County Board of Supervisors has made a terrible mistake by authorizing such an assault to defend the luxury wine industry. That mistake is mobilizing a large number of people to prepare to resist chemical assault. The long-term consequences of forced pesticide spraying in terms of human health and damage to the environment are far more serious than any possible short-term benefit to a single industry.

Fortunately, I do not feel alone.

The growing No Spray movement encourages me. At the end of last summer, as my berry harvest was winding down, I joined the No Spray Action Network. During six months we have spent hours testifying to the Board of Supervisors and other officials, including Rep. Lynn Woolsey, D-Petaluma; state Sen. Wes Chesbro, D-Arcata; Assemblywoman Pat Wiggins, D-Santa Rosa; and various city council members. We have patiently pled our case in whatever forum we could find. The mayors and council members of Sebastopol and Sonoma have been the most supportive. Sebastopol Mayor Larry Robinson and then Sonoma Mayor Larry Barnett testified with us before the supervisors. They have been joined by Sonoma’s current Mayor Ken Brown and Sebastopol council members Bill Roventini, Craig Litwin, and Sam Spooner.

Now we are left with direct action.

On the Line: Inside the nonviolent direct-action training sessions.

Having tried for half a year to dissuade the government from its ill-conceived plan to invade my home and end my livelihood as an organic farmer, I now see no other choice than putting my body on line. I cannot in good conscience cooperate with what would be the destruction of my pollinating bees and other beneficial insects, the damage to my good soil, and the threats to my asthma and thyroid conditions. I feel backed into the corner, needing to defend my home and the work I have done to protect my health and provide healthy food to people.

Psychologists describe a flight-or-fight response to such a threat.

I tried the flight response. Go north, something inside me prompted. So I visited Humboldt County. I liked it. I checked out Mendocino County. It’s nice there, too. But each time I returned to the rural road that leads to my farm south of Sebastopol, I knew that I was coming home. Some things are worth fighting for. I am simply too old to move again and too committed to this particular ground, these particular trees, and this wind that I feel, as well as the territorial chickens that would resist moving. Perhaps I am not so unlike that other biped creature that walks this land each day.

Dozens of customers, friends, and even strangers have said, “We’ll come to your farm to help defend it.” I have an image of many people with cameras willing to document any attempt by a sheriff and his deputies to drag organic farmers, gardeners, and other residents off our lands and away from our homes to open the way for moon-suited poison sprayers.

It usually takes a couple of minutes to drive the short length of the narrow rural road to get to the end where my farms rests. With hundreds and perhaps thousands of people blocking the path of trucks loaded with pesticides, while letting the cars of neighbors through, it would take authorities a long time and many arrests to make it to my farm and to properties alongside such narrow country roads. Our nonviolent direct-action trainings have filled up fast. Our four January trainings have been virtually full, so we already plan to add four February trainings.

When the government targets our yards and lands, it crosses a line and violates our basic civil and constitutional rights. Just as the Vietnam War became unpopular, the $2 billion wine industry is becoming increasingly so among some west county residents.

The days of the mandatory spraying of pesticides by agribusiness are numbered.