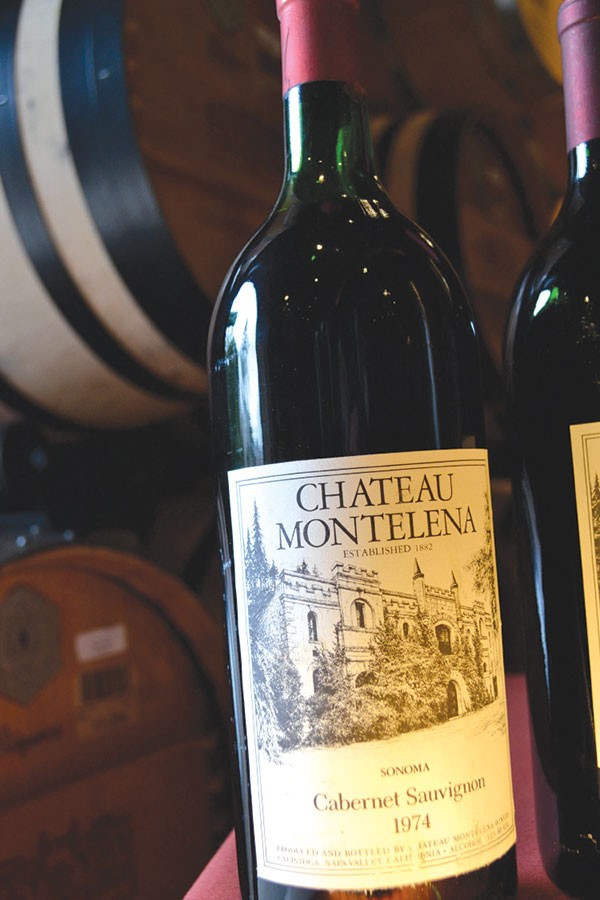 Chateau Montelena offers window into past

The oldest wines poured at Chateau Montelena Winery’s “Dream Tasting” held
Jan. 11—a one-of-a-kind lineup of vintages from 1974 to 2013 that, according to winery CEO Bo Barrett, may never be replicated—aren’t necessarily what most wine consumers would readily drink, or name “best.”

It’s a misperception that all wines get better with long aging in some musty cellar. What this tasting was about was how much better that musty cellar has become over those long years, and how this estate’s particular expression of Cabernet Sauvignon shows up year after year.

Bo Barrett was a surfer kid when he began working for his father, Jim, in 1972 (the two were fictionalized in the 2008 film Bottle Shock). Now silver-haired and sporting a soul patch goatee, Barrett is quick with an entertaining quip, but he’s not “selling” us on wine today—he’s our tour guide, stopping at points of interest throughout the decades, which can be tasted in the glasses in front of us.

That leafy note in the 1980? Typical of aged Cabernet, but also the old crusher used in those days beat up the stems. Later in that decade, they had a machine custom-built to crush gently and sort out the stems—although Barrett prefers not to eliminate stems completely, as they contribute cinnamic acid. On cue, the 1994 shows cinnamon and mint notes. The tannins haven’t fallen out, and aren’t gritty, either. In this decade, says Barrett, it wasn’t just the influence of wine critic Robert Parker, but a convergence of new viticultural findings from UC Davis, the growing confidence of a cadre of winemakers and an unprecedented string of vintages with favorable weather that made the modern Napa style.

The “old cask” aroma of the 1979? Montelena aged the wine in a series of progressively older barrels. The recipe has stayed the same, with only 20 percent new oak barrels contributing a toasty, graham-cracker aroma to the 2007 Cabernet. What changed in the decade of the 2000s was the harvesting practice. Montelena expected its picking crew to complain about night-harvesting the Chardonnay; instead, the Cabernet crew asked why couldn’t they pick at night too.

Besides all that, the wine has been made from the get-go from the same vineyard, using the same yeast, with the same people making and sampling the tanks twice a day during fermentation. “We want to go for batting average,” says Barrett, “not just one hit over the fence.”

After the tasting, we are released on platters of cheese and hors d’oeuvres, paired with a sample of the as-yet-unreleased 2015 estate Cabernet Sauvignon. It’s a brand-new version of that old-school Montelena style.