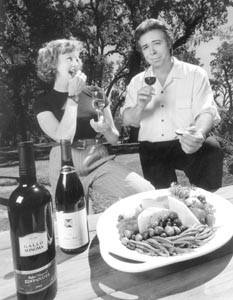 Local flavor: Mary Dee Morrison and Frank Spirarski of Gallo/Sonoma savor the sort of bounty that will be on hand at the upcoming food and wine showcase.

YOU TAKE ALL your visiting relatives to the tasting rooms. You dutifully attend every farmers’ market. You eat at restaurants with cloth napkins when you can, except when the call of “Pink Palace” chow mein joins with the gravitational pull of the couch–you even know which Santa Rosa Chinese restaurant “Pink Palace” refers to. In other words, you think you know the food and drink of Sonoma County inside and out.

But you can’t really know it until you’ve tested the scope of your expertise at the 19th annual Sonoma County Showcase of Wine and Food, held July 14 through July 17.

This year, the word auction has been dropped from the title of the event; predictably, as reported in local media, some loose Napa lips are flapping away about how Sonoma County can’t keep up with Napa’s own annual wine auction. Of course, comparisons between the big wine-auction events of the two competing wine country counties are inevitable. Both have been running for 19 years, and represent regions that are widely recognized as producing some of the best wine in the nation. But comparing begs the question: Do we want to keep up, especially with a package price for the Napa auction of $1,800 per couple?

In terms of accessibility, the Sonoma County Food and Wine Showcase more than keeps up. Ticket prices are considerably lower here, and are available for separate events, even at the door in a few instances. It’s true, though, that the Sonoma County event will probably never be as financially lucrative as Napa Valley’s signature event, which this year collected a record $5.5 million. “The Napa auction has such a huge reputation, a whole life of its own, really,” says Bob Hobart, a senior vice president at Clos du Bois and this year’s local auction chairman. “There’s no way that we as a county and a viticultural region can compete with that.”

Sonoma County also has had to deal with the geographic ignorance of other Californians, who for years persisted in blurring together everything north of the Golden Gate Bridge into one big happy region. Michele Anna Jordan, a Sonoma County-based food writer who is organizing the authors’ booth at the Taste of Sonoma County Showcase, says that people used to ask her all the time if Sonoma is in Napa. But no more, she says. “Now I think Sonoma [County] stands on its own as a separate geographic region in the minds of people throughout the country.”

Accordingly, the showcase has been redesigned as a showplace for Sonoma County, with a full program of tours, meals, and meet-the-people-behind-the-wine events. For the first time this year, the word food is included in the title of the event, indicating an increased emphasis on edibles that both organizers and participants are hailing as an almost revolutionary shift. Of particular note is the July 17 showcase in which local food-industry folks will host cooking demos throughout the afternoon, and Select Sonoma County will staff a prominent booth to give some of its 360 members a chance to spread out samples of their products and produce.

THOUGH FOOD HAS stepped into the spotlight, the wine is still a driving force for this event. Terroir tours introduce visitors to the unique interaction between land, climate, and the resulting quality of the wine, while winemaker dinners bring guests into the heart of the action. And then there’s the auction itself. This year, it’s being held at two sites via an electronic bidding system.

The showcase is turning over part of the proceeds to benefit the national anti-hunger programs of Share Our Strength, a connection that is having a profound impact on the event. “Because of the hookup with Share Our Strength, the showcase has become much more national in scope,” says event coordinator Mary Dee Morrison, special events director of the Sonoma County Wineries Association. “We’re getting responses from across the country.”

Ten chefs from the SOS network will be joining local winery chefs to produce the lunches and dinners. Simultaneously, the showcase has attracted national sponsorship and the biggest, fluffiest feather in a food event’s cap: Food & Wine magazine.

Most local participants agree that broadening the national understanding of Sonoma County’s offerings is important, but they also are aiming for shifts on the local level. Hobart hopes that the showcase will be compelling enough to draw the Sonoma Valley auction (a completely separate event that started eight years ago) into the fold for one mega-event that includes the whole county. She believes the showcase also marks a new era of cooperation between the regions in the county. “People see us as separate, bickering appellation groups,” says Hobart. “That’s not really true, but the perception is reinforced by the separate events.”

Others are hoping for increased local awareness of the interconnection between food and wine. This linkage may seem obvious, but strangely has been underemphasized at auctions past. Chef/caterer Barbara Hom, for one, is excited that the food of Sonoma County is finally getting the limelight that it deserves. “We need to learn that the wine doesn’t stand alone anymore,” says Hom, who has been cooking at the auction/showcase for almost a decade. “The wine can’t exist without the food.”