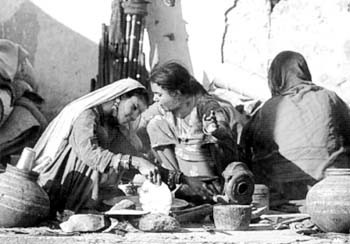 Making chapatis: These soft-skillet breads are popular in India and Nepal.

In praise of flatbreads

WOULD YOU LIKE to make bread, but fear the consequences? Do even bread machines make you twitch? If so, you might consider starting out with something quicker, easier to shape, and less prone to the vagaries of gravity: flatbread.

The term flatbread generally applies to a bread made from a soft dough and patted or rolled into shape, but even in this, the genre of flatbreads is much like a typical flatbread itself: anything but uniform. Many bakers include in the definition of flatbreads thin-battered fried breads that are entirely indistinguishable from what others would call pancakes; crackers, too, such as matzoh or saltines make it into this category.

Cultures all over the world have their own versions of flatbread, using any grain, legume, or starch that was locally abundant, and cooking the resulting dough on anything from a greased griddle to the 800-degree heated clay walls of a tandoori oven.

In the introduction to their thorough compendium Flatbreads and Flavors (Morrow, 1995), Jeffrey Alford and Naomi Duguid suggest that many of the world’s flatbreads originated in regions where fuel was scarce. A fast method was needed for turning inedible raw ingredients into food, and flatbreads, which cook quickly, turned out to be an ideal bread product for the climate and needs of the population.

Millennia later, the very things that brought these breads into their home cultures–ease and rapidity of preparation–are bringing them back to American awareness, or introducing them for the first time. Restaurants have found flatbreads an excellent addition to the breadbasket, breaking up the monopoly of French bread with poppadum-like lentil crackers, tender pockets of pita, thick slabs of focaccia.

Kurtis Baguley, a San Francisco-based pastry chef and instructor, says that most restaurant kitchens that bake their own bread make at least some flatbread. “You can whip it up, let it rise once, press it into a pan, and just stick it into the convection oven, which every restaurant has.”

Busy home cooks also appreciate the easy rhythm that most flatbreads–even the leavened kind–offer. The yeasted dough usually rises only once, if at all, and sits for a few minutes, then gets stuffed into the oven or slipped onto a hot griddle.

And if you’re determined to experience one of the many ethnic cuisines that go into America’s melting pot, a piece of authentic flatbread is the best way to soak it up.

The breads are the perfect utensil for chasing down and scooping up the runny curries and stews of India, and help diffuse the heat of the other food.

Strangely, the flatbreads best known in the United States, pizza and tortillas, are also the ones least approachable. Thanks to the image of the trained tortillera, or tortilla maker, slapping out the dough in her hut, most folks wouldn’t even think of trying to make their own, and opt instead for the easy prepackaged version. This is fine if you’re just looking for instant transportation for a can of refried beans, but most bakers would agree that a good home-cooked tortilla, like other breads, is worth the 45 minutes or so it takes to mix up some flour and water and roll it out.

As much an archetype as the tortillera is the enigmatic pizza twirler. But even pizzas can be handled by the uninitiated, as Baguley’s class will show. A few hours inside learning the basics give the students a good grasp on the subject, and then they head outside for a pizza barbecue. Sounds a little strange, but Baguley insists it’s one of the best outdoor party ideas around.

“Everyone brings a topping and you just supply the dough,” says Baguley. “You just have to make a few pizzas, and after that everybody gets turned on to it.”

Kurtis Baguley is teaching “The World of Flatbreads” at Ramekins Sonoma Valley Culinary School on Saturday, July 17, from 10 a.m. to 3 p.m. Course fee is $65; preregistration is required. For details, call 933-0450.