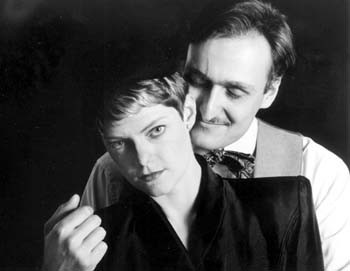 IT’S SUMMERTIME and the livin’ is easy–unless, course, you’re involved with repertory theater and facing the rigors of five productions over seven brief weeks. Such is the lot of the 21 players from all across the country–said to represent the crème de la crème of college actors–who make up this year’s company at Summer Repertory Theatre.

An annual mainstay of the local summer stage, SRT, in its 28th season, cools down the dog days on two stages with a full bill of musicals, farces, comedies, and absurdist dramas–and occasionally does all at once.

Grease The pre-eminent ’50s-inspired rock ‘n’ roll musical, Grease sets the war of the sexes at Rydell High School, circa 1959, where bobby soxers and pedal pushers clash with leather jackets and DAs (back when the term was a hairstyle and not a legal career).

“We’ve been trying to get Grease for about three years. Until it revived itself, you could get it all the time,” says SRT’s associate artistic director Mollie Boice. “Once it became a such a big revival piece, they weren’t letting out the rights to anybody.”

But SRT’s vigilance has paid off, and the Pink Ladies and T-Birds are at it again in a crowd-pleasing, well-oiled production that has kicked off the action-packed season and continues through Aug. 6 at the Burbank Auditorium at Santa Rosa Junior College.

Charley’s Aunt It’s farce, 19th-century style: Jack loves Kitty and Charley loves Ms. Spettigue; the young men invite the ladies to meet Charley’s millionaire aunt, who at the last minute, postpones her visit. So as not to compromise the young women’s reputations or forgo a chance to profess their love, the duo convince Oxford chum Lord Babberly to masquerade as the dollared dowager. Chaos ensues when the real aunt (who else?) unexpectedly arrives in playwright Brandon Thomas’ timeless door-slammer.

“Thomas wrote Babberly for a particular actor, who in turn trained all of his replacements and all the people who toured the show,” says Boice. “He trained these actors to perform the role exactly like him, and sometimes he would go out and do the first act and have an understudy complete the play.”

Boice gives assurances that no such shenanigans will occur in SRT’s production, which is directed by Squire Fridell, whom she describes as the “king of farce” (he directed last year’s old-time serial parody Bullshot Crummond). Charley’s Aunt opens June 26 and runs through July 31 at the Santa Rosa High School auditorium.

The Visit Swiss avant-garde playwright Friedrich Dürrenmatt pays a call this summer through his stage-borne examination of justice, revenge, and virulent venality in The Visit.

“It’s about a woman who is returning to a town that was once the cradle of culture and is now bankrupt,” says Boice of the award-winning play. “She was railroaded out of town, but now she is the richest woman in the world.”

The hook? The wealthy returnee will finance the town’s fiscal recovery for a price. She requires the murder of the man who disgraced her and forced her to leave. The idea is at first dismissed, but eventually the townsfolk’s tenuous morality becomes eclipsed by avarice in what many critics believe is Dürrenmatt’s finest work. The Visit opens July 2 and runs through July 31 at the SRJC Burbank Auditorium.

Laughter on the 23rd Floor Writers’ alter-egos often turn into altar-egos, ready-made for self-worship. Playwright Neil Simon avoids that pitfall in this work by turning his insightful comic eye not only on himself but also on the gaggle of gag men with whom he spent his salad days penning television comedy.

“It’s Simon’s tribute to Sid Caesar and Your Show of Shows,” says Boice. “He and his brother Danny, Mel Brooks, Carl Reiner, and even Woody Allen were writers on the show.”

Posited as a fictional memoir, this play has Simon riffing on his illustrious cronies, detailing their comic one-up-manship and the Caesar-inspired comedian Max Prince’s attempt to subdue nervous network honchos who think his shtick goes too far for Mr. and Mrs. Middle America. Laughter opens July 8 and runs through Aug. 4 at the Santa Rosa High School auditorium.

The musical uses the open variety format of the Ziegfield Follies to recount the populist philosopher’s life story. Hayes’ homecoming performance–he’s a veteran of stages across the country (and is also a theater professor at Florida State University)–marks his fifth season with the company and the first year SRT has appointed an artist-in-residence. The Will Rogers Follies opens July 14 and runs through Aug. 7 at the SRJC Burbank Auditorium.

Of course, the success of this ambitious season depends on more than the skill of the thespians involved. The audience, too, plays a key role. After all, it takes more than summer heat to warm theater seats.