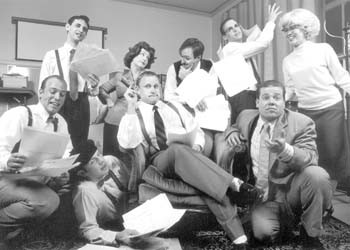 Laughter on the 23rd Floor

TV nation: Jill Page Collister, William McNeil, and Jeff Mattlin write for the tube in Laughter on the 23rd Floor.

‘Laughter on the 23rd Floor’ stays in the basement

THE ELEVATOR SEEMS to have jammed en route to the humor in Summer Repertory Theatre’s production of Neil Simon’s comedy Laughter on the 23rd Floor, directed by Michael Harvey.

A stage-borne memoir scrubbed of enough autobiographical data and bite to leave potential litigants claimless, Laughter on the 23rd Floor is Simon’s wan love letter to his early days as a freshman television writer for Sid Caesar’s Your Show of Shows. Simon culled his characters from the battery of funnymen then in Caesar’s employ (Mel Brooks, Carl Reiner, and Simon’s brother Danny among them), and this cast constitutes a promising premise that never delivers.

Throughout, Simon riffs on his cronies and details their virtuosic ability for humiliating each other as the Caesar-esque Max Prince (played here by William McNeil with great gusto as a pill-popping, paranoid booze-hound) battles network honchos more concerned with the bottom line than the erudite comedy churned out weekly by his stable of thoroughbred writers.

At its worst, the humor of Laughter on the 23rd Floor is humorlessly baroque: Some gags choke on themselves, and others simply seem decorative, almost requiring a rimshot to cue the audience when to laugh.

There are some true laugh-out-loud moments, however, as when the fashion foibles of writer Milt Fields (Sean M. Smith) get some ribbing when he is told his white suit makes him “look like a Nazi trying to catch a boat to Argentina.” It’s not hard to imagine that such glib, throwaway lines are an accurate keyhole into the surely cheeky world of television writing.

Most of the play’s shtick, however, seems cribbed from the circular file at Mad Magazine, and though director Harvey keeps the pace brisk, what is intended to be balletic banter often dissolves into cacophonous blather.

A number of fine performances nearly bring the production to the brink of redemption–Joseph Hutcheson’s laconic Kenny Franks, a master of the withering gaze, is crisp and jocose, and Rickel’s Brooks redux is a constant scene-stealer. McNeil’s Prince also offers occasional moments of hilarity with his blustery antics and manic manner.

Other performances, however, are merely distracting. Jeff Mattlin draws an earnest portrait of Russian émigré-gone-gagman Val Skotsky, but his thick Euro-trash stage accent renders his dialogue unintelligible, and Mark Bakalor, whose wooden asides as Simon’s alter-ego Lucas Brickman serve to expedite the play’s lackluster plot, tends to recede into an invisible-man act when not specifically spotlighted.

Unfortunately, Laughter on the 23rd Floor never fully explores the emotional and artistic dynamics underscoring the writers’ relationships to one another. Consequently, its stabs at poignancy come off as hackneyed and maudlin–and Simon’s audiences, who are usually on the edge of their seats, may instead find themselves dangling their toes off a window ledge.