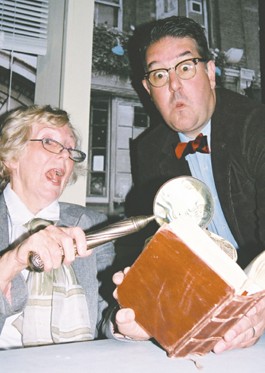 Playwright Dale Wasserman, in an interview given not long before his death at age 94 last December, was asked if the act of writing ever gave him satisfaction. His answer was no.

“Since I work in the dramatic field,” Wasserman explained, “my satisfaction does not come from the writing at all. It comes from seeing the production of what I have written. After that, I go away and forget all about it.”

With this typically frank remark, the curmudgeonly Wasserman’s death becomes particularly tragic, as it means he never had the satisfaction of seeing his final work brought to the stage. Titled Premiere, the wittily comic play will receive its own premiere this weekend, as the Ross Valley Players become the first company outside of Wasserman’s home state of Arizona to produce the show.

Wasserman is best known for his stage adaptation of Ken Kesey’s One Flew Over the Cuckoo’s Nest and the musical Man of La Mancha, adapted from Cervantes’ Don Quixote. The former has been translated into over 40 languages and is considered one of the most enduring modern dramas to hit the stage, and the latter, with numerous awards including a 1966 Tony for Best Musical, ran for 2,328 performances in its initial Broadway run, and has been playing on some stage, somewhere in the world, ever since. Sadly, the newspaper obituaries only cited these two plays as the playwright’s artistic legacy, omitting the dozens of screenplays, television scripts, plays and musicals that also bear his name.

A voracious reader with an enormous sense of curiosity and wonder about the world around him, Wasserman never stopped writing, though none of his less-famous works made the same impression on the world as Cuckoo and La Mancha. This clearly annoyed the man, as evidenced by his comment on his own website (www.dalewasserman.com): “It is customary for an author to list all his credits. I do not intend to do so. It would not only remind me of my age but also of my failures. It is well known, I think, that I wrote Man of La Mancha and the stage version of One Flew Over the Cuckoo’s Nest, two plays which have spread like pandemics. But lately I feel more like their midwife than their creator. I’d rather call attention to the new and recent works which are yowling for attention, including some not yet seen on any stage.”Among these is Premiere, the story of a scholarly playwright best known for his comedies, struggling for recognition as a serious writer, who pens a Shakespeare-emulating manuscript titled The Tragedy of Alcibiades. In an act of desperation, he presents it as a “lost” play by Shakespeare himself. His hope: to exploit the playful fraud to call attention to his own playwriting genius. When Alcibiades is pronounced to be authentic by a hoard of experts, however, the playwright finds himself unable to convince anyone that he is the play’s real author. Premiere, directed for RVP by Robert Wilson, was brought to the venerable 80-year-old company by the playwright’s niece, Abby Wasserman, a journalist and author who lives in Mill Valley.

It is probable that Dale Wasserman identified strongly with his respect-craving playwright protagonist, though the self-educated, one-time rail-riding hobo was famous for eschewing the opinions of others, refusing to attend award ceremonies and energetically fighting with collaborators. Wasserman always saw himself as an outsider, and his life and legacy reflect that view. As he remarked in the aforementioned interview (which can be viewed in its entirety on Wasserman’s website): “All of my plays deal with the outsider, the social reject, the rebel. I’d be the last one to say that no one must do this, that, or the other. Every rule can be broken. I know, because I’ve broken all of them.”