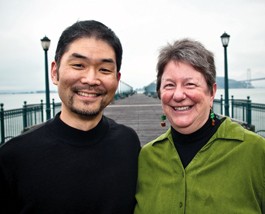 Stan Yogi’s dinner with Heyday Books owner Malcolm Margolin resulted in the birth of a six-year-long project after Margolin raised the notion of a book focused on the history of civil liberties in California. It was post-9-11 and the federal government was targeting Middle Eastern immigrants and citizens for constitutionally questionable roundups and registration programs.

“The Bush administration was actively promoting the idea that any dissent against its policies was equal to disloyalty,” says Yogi by phone from his San Francisco office. “Malcolm thought it would be great to remind readers that there were other times in our state history when civil liberties were under attack and specific populations were targeted.” The result of that auspicious dinner, Wherever There’s a Fight: How Runaway Slaves, Suffragists, Immigrants, Strikers, and Poets Shaped Civil Liberties in California (HeyDay; $24.95), co-authored with Elaine Elinson, was published last month. Yogi and Elinson appear at Book Passage on Nov. 17.

Yogi recruited Elinson to work on the project after he found out that she was interested in historical research. At the time, she was the communications director at the ACLU of Northern California, where Yogi continues to work on the management of development programs. Elinson readily agreed, and the two began the task of painstaking research in archival libraries across the state, a process they thought would take a year and half but ended up taking almost six. They interviewed Rosie the Riveter workers as well as Japanese-Americans incarcerated during WW II; the resulting stories span the period from the Gold Rush to current times.

A surprising discovery the authors uncovered was that California’s constitution was originally a bilingual document, and that the constitutional debates in Monterey were in English and Spanish.

“Another thing that was shocking, on a sadder note, was that even though California entered the union as a free state, slavery was tolerated,” Yogi adds. “For example, slave owners who were passing through the state were allowed to keep their slaves, and some slave owners openly flouted the antislavery laws because no one was really enforcing them.”

It is stories like these that Yogi hopes people will learn from.

“One of our goals is to really bring alive the civil liberties principles through the stories of people who have stood up for their rights, often alone, in the face of political oppression or sometimes outright physical violence, economic reprisals, social ostracism,” he says. “They aren’t just these lofty ideals that we strive for but that they impact people in the day to day.”