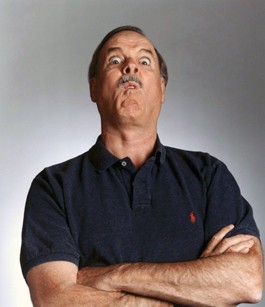 John Cleese can do as he damned well pleases

As we take a look back at John Cleese’s incredible career, it’s impossible not to quote Monty Python. This is not because Cleese hasn’t accomplished plenty on his own; one need only think of the classic comedy A Fish Called Wanda or the Britcom Fawlty Towers. But it’s because the legendary British comedy troupe has soaked through so much of our pop-culture fabric that quoting Monty Python is more like a reflex than a voluntary act.

For newbies, here are three examples of how this phenomenon might come up in real life: (1) Whenever anyone asks you your favorite color, say “Blue! No, yel—” and then act like you’re falling off the Bridge of Death. (2) Whenever you’re in a roomful of people and someone yells for “David,” wait till the guy says, “I’m David!” and then say “I’m David—and so’s my wife!” (3) Whenever your friends point out that your parrot has died, assure them that, “It’s not dead. It’s resting.”

Anyway, it’s not clear exactly what Cleese will be speaking about on this tour, but really, does it matter? The guy can be funny about anything.