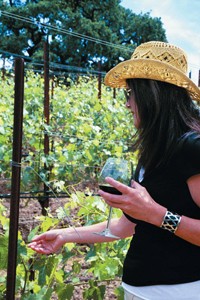 Wine Woman: Julie Martinelli, public relations manager for her family’s winery, offers some model behavior as a woman who knows her wine. The Martinelli Winery has employed female winemaker Helen Turley for over a decade.

Ladies lead the charge of the flight brigade

Hang around the wine bins at Costco long enough and at least two things become obvious pretty quickly: five pounds of shrink-wrapped hamburger is a really scary sight, and a whole lot of women are buying wine. Along with what detergent to purchase and what cat food Whiskers covets, recent studies show that, by and large, women are the ones making the everyday decisions about what to drink with tonight’s grilled asparagus or frozen pizza. In fact, a 2003 survey conducted by the Wine Market Council found that women account for 60 percent of all U.S. wine consumers.

As the primary shoppers for food and beverages, the fact that women are out-purchasing men on a day-to-day level is not a shocking revelation. According to another study by Christy Frederick Marketing, a whopping 77 percent of women polled say they make all, or nearly all, the major wine purchases for their home. What is surprising, however, is that wine-buying women aren’t just a Costco or Safeway phenomenon.

Women are buying more and better bottles of wine than their male counterparts, with some 64 percent of those purchasing high-end wines (described as bottles over $15) being females. Women are also drinking more wine, consuming an average of two to four times per week–far outpacing men’s consumption. “Wine for women is not a status symbol or collectors’ item; it’s about enjoying life with family and friends one bottle at a time,” says Petaluma wine writer Leslie Sbrocco.

But despite women’s comfort with buying, consuming and pairing wine, 56 percent of women still say there are some barriers to entry. A perceived lack of wine knowledge ranks high, along with the sometimes testosterone-infused jargon and posturing of wine collecting and tasting.

To help their sister sippers, several female authors have penned books specifically aimed at the female wine-drinking audience. Written in a “girlfriend to girlfriend” style, Sbrocco’s Wine for Women was inspired by the author’s own research into what women wanted to know about wine–everyday stuff, like how to pair food with meals, how to entertain with wine and how to purchase wine.

Another recent release is The Saucy Sisters’ Guide to Wine by sisters Barbara Nowak and Beverly Wichman. Their straightforward approach is intended to appeal to a new generation of wine-drinking women who are embracing wine with even more fervor than their foremothers. The fastest growth category of wine drinkers is among savvy 21- to 29-year-olds.

Alicia Kelly of Napa’s Bounty Hunter wine bar says that the younger buyers market (she generously categorizes younger as being “from their late 20s to early 40s”) is dominated by women. “In a younger generation, it’s looking like the female decision maker wins, especially when it comes to wine. They know what great wine is, and they make the decisions,” she says.

It wasn’t always that way. Even today, many women say that when they ask for a recommendation for a bottle of wine, they are often ignored or pegged as a white Zinfandel drinker. Sweet, perfumey and simple to drink, white Zin remains the country’s bestselling, yet notably novice, wine.

But 47 percent of women polled by Christy Frederick Marketing say they aren’t into such cloying flavors, rather favoring heartier, zestier wines like Merlots, Cabernets and Zinfandels. Only 38 percent preferred white wines. The rest are split between blush and sparkling wine, the latter of which gets only a paltry 7 percent vote.

Swirling a glass of Syrah in her new restaurant, Phyllis Rodgers is a woman who likes red. Her winery, Chateau Felice, will soon release a custom-blended wine called Tall Woman Likes Red. A mix of Cabernet, Merlot and Zinfandel, the wine, she assures, is “big, bold and beautiful.” It was also a personal project she embarked on with her daughter, winemaker Genevieve Llerena, after taking a picture of herself elongated in shadow on their property. The two blended a lusty, spicy wine that personally appealed to Phyllis. After sharing a few early-release bottles with friends, she’s already got a fan club of eager women waiting for the limited-production bottling.

“I’m not a big woman. I’m kind of short, average. But this wine appeals to the tall spirit in every woman,” she says.

Healdsburg winemaker Joni Nance is also about to unleash a series of “bolder, brassier wines” through her Venus Vineyards. She describes the Cabernet Sauvignon and Syrah as “enhancing the untamed, spirited nature of these varietals.”

According to Daniel Dawson of Backroom Wines, “While more men are interested in the ‘bigger is better’ wines, women are more likely to choose wines with more pretty flavors, complexities and such. Men go for Cabs and big Zins; women for Merlot, Pinot Noir and blends.”

But the biggest test: will women drink wine from a box?

The answer is maybe. Boxed wines are making a solid attempt at breaking through their white-trash rap and getting some credit. Black Box Chardonnay is the first premium boxed wine ($21), released in 2002. The wine is a lighter, less oaky flavor that pairs well with food. The packaging and the concept are aimed at a young, active female crowd, with a sleek box design that the creators say is reminiscent of “that little black dress.”

While that may be a bit of a stretch, the creators have discovered anecdotally that women drinkers often want just a single glassful and won’t open a new bottle on such an occasion. The newish packaging–boxed wine has been a languishing concept for over 20 years–allows for long-term storage and convenience for its “active lifestyle” demographic who want to be able to take the box on picnics, to the beach or camping without worrying about a broken or half-full bottle rolling around the trunk.

Where women buy says a lot about how they buy. In an informal survey, I asked several female friends and acquaintances their favorite wine haunts. Top of the list was often Costco. Despite its reputation for sensory overwhelm, the discount grocer happens to be the largest importer of first-growth Bordeaux in the United States and plans continued growth in providing premium wines, those that fall into the $18-$30 range.

In fact, Costco carries precious few wines under $6. On a recent visit we spied some very tasty bottles of J, Guenoc, Niebaum-Coppola, Far Niente and Rosenblum just waiting to be snapped up. And guess who was doing most of the snapping-up?

Over a 45-minute observation period (using an admittedly unscientific method called “reporting as you shop”), women were doing the buying at a rate of almost three to one. Forget the Chablis, Mister. These value-oriented female shoppers were selecting some pretty impressive bottles to pair with their yard-long sheet cakes.

Costco, together with megastore Sam’s Club, rings up a full 28 percent of the country’s $3.8 billion wine industry. Discount wine retailers like Beverages and More and Santa Rosa’s Bottle Barn are also popular. “If I had no kids, and more time to wander, I would buy it all at Bottle Barn, as their prices rock,” laments one mother who frequently defaults to high-priced supermarkets for convenience. Kids and hundreds of glass bottles, it seems, don’t always go well together.

In my opinion, BevMo wins out as the most female-friendly place. Their wine racks include three important pieces of information: relevant critics’ ratings, a description of the wine’s flavors and suggestions for food pairing. “Goes well with steamed mussels” or “Great with stews” are helpful ways to find a wine that matches whatever’s cooking for dinner.

Part of the reason that many women claim to be attracted to wine–aside from that 87 percent who report that it makes them feel “sexy”–are the purported health benefits. Studies of various repute have touted wine as doing everything from helping in conception to keeping the heart healthy (also known as he “French paradox,” given its usual pairing with triple crème cheeses and other Gallic delicacies) and even helping to control diabetes.

But how about drinking wine for emotional health? According to a 2001 study published in the “Archives of Internal Medicine,” “women who preferred wine tended to be less neurotic and more extroverted than those who preferred beer. But beer drinkers were more likely to abuse alcohol and drugs.

Well. Guess there’s something to be said for being a wino after all.