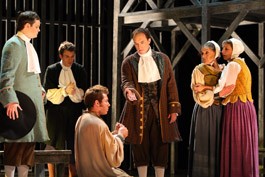 Arthur Miller’s The Crucible is one of those shows that, like Thornton Wilder’s Our Town and Frances Goodrich and Albert Hackett’s The Diary of Anne Frank, has suffered from decades of well-meaning but painful productions at the hands of underfunded high school theater departments and lesser community theater companies. After half a dozen such stagings, it is easy to forget that The Crucible, arguably Miller’s most accessible and riveting play, is a true American masterpiece. When done well, with a strong director, it is packed with drama and dripping with tension and roller-coaster emotions.

That’s the kind of Crucible that opens the Summer Repertory Theatre’s 2008 season at the Santa Rosa Junior College. With director David Storck orchestrating a first-rate cast of rising young actors from around the country, this is the Crucible to see.

Summer Repertory Theatre is one of the few remaining training-based repertory programs of its kind in America, and the North Bay is fortunate to have it. The first of five plays and musicals that make up this season at SRT (Claire Booth Luce’s The Women and Mel Brooks’ The Producers are up next), Storck’s production looks remarkable, with a sprawling, Broadway-quality set by Nathaniel Sinnet, and maintains a tone of grounded believability as the story of the infamous Salem witch trials plays itself out like a Hitchcockian thriller.

In 1792, in the contentious close-quarters of tiny Salem, Mass., farmer John Proctor (Matthew David Gellin) finds himself drawn into a local witchcraft scare when trouble-making Abigail Williams (an effectively duplicitous Jennice Butler), with whom Proctor once had an illicit affair, accuses several local people of trafficking with the devil. One of the accused is Proctor’s upright wife, Elizabeth (Denice Burbach, also very good), who has been struggling to forgive her husband after his fling with Abigail.

For her part, Abigail’s plot is two-fold: Her minister uncle, the self-serving Rev. Parris (Kyle Schaefer), has caught Abigail and several of the local girls dancing in the woods, playing at witchcraft as Abigail attempts to place a curse on Elizabeth Proctor. Frightened that they’ll be whipped or worse, the girls haphazardly improvise an alibi: they were under the spell of powerful local witches.

When the adults do more than just believe them, actually establishing a court to discover and try anyone consorting with the devil, the girls, with Abigail their tyrannical leader, find themselves gifted with a remarkable amount of local importance. From her new-found position of power, Abigail discovers a way to rid herself of Elizabeth, whom she sees as standing between herself and John, and she quickly devises a way to frame her for witchcraft.

The way all of this plays out is alternately hilarious and terrifying, with the superstitious and hypocritical Puritans turning on one another like starving dogs in a pit. While Gellin is a bit physically stiff, he has nailed the pent-up hurt and righteous rationality that defines John Proctor, and his final scene, in which, accused of witchcraft himself, he heartrendingly wrestles with own conscious, is a whopper of a performance.

Also good in a cast full of good young actors is Tyler Seiple as the visiting minister John Hale, an “expert” in the occult who at first unwittingly stirs up the villagers’ fears and then tries in vain to stop the destructive momentum he has started. Jacob Mahler, as Deputy-Governor Danforth, is properly frightening, wielding the powers of judge and jury with the right amount of arrogance and cruel relish. In the smallish role of Judge Hawthorne, Max Smythe displays a delightful ability to be skin-crawlingly creepy while doing nothing but staring at someone. Mollie Boice, as the good-natured Rebecca Nurse, the only one who keeps her head even after being accused herself, is also strong in a small but pivotal role.

The real star of this show, however, is David Storck, the director. With a firm hand on the play’s pacing, blocking, dramatic build and subtle sound elements (nicely done by Theo Bridant), he keeps this uniquely American story grounded in the human stories of its characters. And it is a timely story as well. In a world where a simple fist-bump or funny name can result in accusations of terrorist leanings, it is important to remember that we are never more than few idiotic steps from replaying Salem’s witch-hunt hysteria all over again.