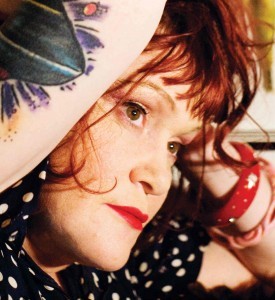 Best known for singing with the legendary L.A. punk band X, Exene Cervenka is a bit rough around the edges, and that’s a good thing.  She says she’s not a role model, but to the wild-bitten women out there, those that sing their hearts out and dream of being on a stage, she is nothing short of an inspiration. In the following interview for this week’s Bohemian, she speaks about finding individual voice, feminism, singing with John Doe, and why girls need to be reminded that they are much more than what they look like on the outside.How did you find confidence in your voice?

Well, I certainly had to find it. I hadn’t sung in any way shape or form my entire life until I was 20. John Doe and I would sit around and sing old songs. Hank Williams songs. George Jones songs. Any kind of old song that we felt like doing. Singing was incredibly difficult for me. I had to make up my own voice, and I’m glad I did because  my least favorite thing in an artist is imitation. I would not want to sound, or do, or be, or act anything like anyone else. I just don’t believe in it. People should, if they’re going to be an artist, develop their own voice. It’s a lot harder than copying someone else’s voice.How might someone develop that?

You can practice singing with no instrumentation. By yourself, no one listening. Learn to sing at different volumes and different intensities. Also, you need to sing from your diaphragm and not your throat, which is why I’ve never had to cancel a show because my voice went out.

When I sing with X, there’s a lot of chord changes. John’s singing, I’m singing. That was a hard thing to start out with in a career in music. I didn’t start out with simple songs. Now, when I write songs, I write them so simple I can sing the crap out of them. You know what I’m saying? Like chord changes and lots of notes and things, that’s hard. Start with some really great old songs! (she sings a measure of “She’ll Be Coming Around the Mountain.”)We live in a society that tends to devalue artists. What has sustained you as an artist throughout your long career?

What’s sustained me is knowing what I’m doing is what I’m supposed to be doing and there’s no real way out of it. So, I always make the best of it and I don’t give up on anything. And I represent myself as best I can. Not as a role model maybe, but as an example to people  of what you can do. Because I’m not a trained singer.

You know, I do a lot of things I’m not supposed to do. You just have to have determination. People think of ambition and they think of determination and they think of, you know, these goals people set, and never giving up. It’s not really like that as an artist. It’s just who you happen to be. You don’t have to force it, and be ambitious and be angry if things don’t go your way. You’re just an artist. You don’t have to have any pressure other than that. That’s plenty right there.What advice to you have for artists and writers etc., especially women, who are just beginning down that road?

That’s the really big important question. I believe that everybody is like a self-begotten divinity. Inside of us there is all of the power to be whoever we should be, want to be, are. We’re not even allowed to find out who that is. You go to school. You get a job. You have kids, whatever. You hear about it all the time, a mid-life crisis some people say. Who am I? And why am I in a cubicle?

We become an artist out of a desire to be a creative individual. And then, you try to conform to what’s going to be popular. . . you know, you end up in the cubicle again. Like a sheeple. But you have to be able to. . . I’m sorry. . .  get rid of your ego. And you have to enjoy what you do. It has to be the best greatest thing, and everyday you’re so lucky, you think, that I can sing or play guitar. Or be in a band. Or play music. Or be an artist. You can’t be like, “My life is so hard. I don’t make any money. Why am I so talented and yet other people get better situations?”

My goal is to help motivate women to take more control of the culture and the society, and ultimately, the political system. Because if they don’t, we’re fucked. Because women and children are last now instead of first and they seem to be fine with it. Schools are closing, people are getting uneducated instead of education and women seem to be fine with that.It seems to be ingrained into us as a society. I find myself in situations, even after educating myself about feminism, where I say about patriarchal ideas, “Oh, it’s being replicated…again.”

Well, two thousand years of slavery will do that to a people. You know belief systems were designed to subjugate women. That’s why they were designed. Think about it. From the Book of Genesis on.

We have to change our consciousness, we can’t just do the work. Doing the work hasn’t done anything. We’re back where we started in 1976 for women’s reproductive freedom. I mean, we’re about to lose a lot of that, because of not being on guard. It only takes one little chink. The people who are against the public interest—that think of us as consumers only and not citizens or people. The people in power, the people in government, people with the money who invest in the government, they’ve disabled us because they have millions of lawyers who look for nothing but loopholes in the law and lobbyists who write new laws and then give it to the people in government as if they wrote it. And most of those people tend to have a very strong right-wing ideology. And they are anti-woman.

I was at an event the other night and at the end there was a big, all-star, everybody get together at the end of the night guitar thing. There were sixteen men on  stage and Rosie Flores. We were all so happy she was up there because I just can’t bear one more, all-male music party. I’m so sick of it being, all guys all the time. And there’s no reason for it except for self-censorship and self-subjugation. No one said you can’t be in a band.

What we have to stay away from in music is the hardcore male element that took over punk. Because that language will not be accepted when it’s spoken by women. Women shouldn’t speak a man’s language anyway.

The alternative to that isn’t being some kind of insipid singer-songwriter writing about her boyfriend. It is finding your own voice, which we already talked about, and that makes an original take on things and then it’s like nobody’s voice but yours, nobody’s language but yours. That’s a good example to set for girls, because that’s what they’re fighting against. They want to be individuals  but they totally have to conform to standards of beauty and standards of weight and standards of appearance and standards of dress, and standards of roles. Like, you can be Beyonce but you can’t be Willie Nelson. You have to conform to this sexual stereotype primarily, to be pleasing to men. You have to look good and sound good, you can’t be rough around the edges.