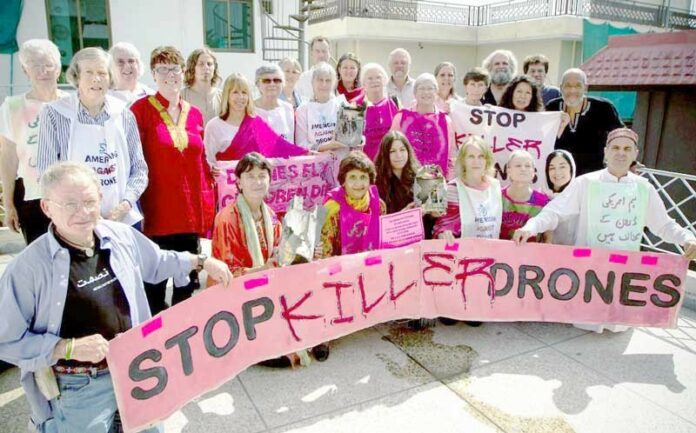 It was at a Nov. 18 news conference in Bangkok, that President Ogama told Egyptian and Turkish leaders, in regards to the blow up in Gaza, “Let’s understand what the precipitating event here was that’s causing the current crisis, and that was an ever-escalating number of missiles. They were landing not just in Israeli territory, but in areas that are populated. And there’s no country on Earth that would tolerate missiles raining down on its citizens from outside its borders.” The statement seems more than ironic in light of the fact that U.S. drones have been “raining” deadly missiles down on combatants and civilians alike in Pakistan, in an area that bordering Afghanistan. Between 2004-2012, between 474 and 881 Pakistani civilians (including 176 children) have been killed by the controversial drone attacks. This week, the Bohemian’s news story features Barbara Briggs-Letson, a Sebastopol resident recently returned from a Code Pink delegation to Pakistan. The trip was led by Code Pink cofounder Medea Benjamin, a long-time anti-war activist who’s been trying to get the word out about drone warfare in a country with which we are not at war. Here’s our complete interview with Medea Benjamin.

Are the actual numbers of innocent civilians killed by drones actually higher than what has been admitted by the Obama Administration?

Oh, totally. What we’ve been told by the Obama administration is that there are a handful of people that have been killed. Or, at the most, we were told by the ambassador in Pakistan that it’s in the low digits—and that is just not true. Even the most conservative estimates are in the hundreds. The one that’s considered to be the most reliable is the Bureau of Investigative Journalism, and the numbers are in the thousands. There’s a big question about what actually is an innocent person, given the definition of what is a militant by the administration being any male of military age that lives in the strike zone. For Pakistan, they say somewhere between 500-900 for civilians. For total people killed, 2500-3500, so the question really is, who’s a civilian and who’s a militant, but there’s no question that the numbers given out by the administration are just not true. They’re ridiculously low.

And military age in Pakistan is what exactly?

It doesn’t make any sense. It’s basically somebody who has facial hair on them. In that part of the world, it’s not like there’s a draft. People can sometimes barely even tell you their ages.

Now that Obama has been re-elected, what’s the next step when it comes to drone warfare?

First, we have to do massive education. That’s why it’s so important for people like Barbara Briggs-Letson, to be out there. She can reach into the faith-based community, to students and the 34 people who went on the trip are all doing that. The education and writing campaign that turns around the numbers. The fact that the majority of Americans think that drone strikes are okay means that we have a lot of work to do.

These are all places where drones are constructed, or where people are trained to fly them?

Or they’re actually being piloted from there. So the upstate New York group is a broad coalition of people from places like Buffalo and Albany. They’ve organized because Hancock Air Force Base is in their community and is flying drones in Afghanistan and, they think, Pakistan. So it’s not only the training, it’s the actual pressing of the kill button.

That seems so far away.

That’s what’s happening at Creech Air Force Base in Nevada where many of us have protested. Code Pink people. Veterans for Peace. Catholic Workers. People at that base are killing people thousands of miles away. They’re doing it from the comfort of an air-conditioned room, in a comfortable chair, and going home to their families at the end of the day.

It sounds like there is a huge disconnect in terms of the American consciousness about drones. It seems almost like science fiction, even though it’s very real and people are dying. We have such a set concept of what ‘warfare’ is, but this seems like a whole new form of ‘warfare’ that we almost can’t wrap our minds around.

That’s right. It’s really hard to imagine what would appear to be like a video game with consoles, PlayStations and joysticks. It’s a new form of warfare where one side doesn’t put their lives at risk at all. The question being asked by everyone from folks in the United Nations to faith-based communities, they’re saying, if we’re so removed from the human consequences of these actions how can this generation of fighters really value the right to life?

What about the idea that there is a ‘surgical precision’ to the drone strikes?

That’s false. These are much more precise weapons than those they’ve had in the past, but they’re not surgically precise. There all kinds of issues related to them including, what information are the pilots given as to whom is on the kill list? Who is being attacked? A lot of the time, it’s faulty information. They think they’re trying to get the person they’ve put on the kill-list because they’re a high value target related to Al Qaeda, and it turns out they’ve killed a bunch of poor Pakistanis that had nothing to do with the target.

So one instance is faulty information and the issues about the collateral damage. I hate to use that term. So many people who have been killed in are in the homes of the person that’s been targeted. So the wife, or the kids, and then they also have follow-up strikes, where they send in another drone, another missile after the first one, that kills rescuers and humanitarian aid workers who try to rescue the people. There have been drones that have hit funerals because they figure that if they killed someone from Al Qaeda or the Taliban, then the people at the funeral are going to be part of that as well. These are all things that can be considered, in the case of killing humanitarian aid workers, war crimes, and in the other cases, certainly violating basic rules of war. And there’s all kind of other issues that come up around how precise these actually are. There’s the shrapnel and debris that goes flying after these drones strikes. There’s all kinds of ways that you could say that we’re being sold a bill of goods about precision weapons which really leave a lot of death and destruction in their wake to innocent people.

I hope Barbara talked about the question of how this is terrorizing whole populations. There are 800,000 people that live in Wazharistan and with these drones, sometimes 24 hours a day non-stop over their heads, how they live in a constant state of fear. The people we met with talked to us about the tremendous state of depression that people are in, trying to self-medicate with anti-depressants, suicide happening and how it really has changed the life of the community. They said to us, “You’re waging a war on terror by terrorizing our population.”

In a country that we’re not actually at war with.

That’s right. And that’s really paying the price for the spillover of our war with Afghanistan.

Is there anything else that you want the American public to know regarding the use of drones?

I mainly wanted to say how amazed I was at this delegation. The 32 people who had signed up to go to a very dangerous part of the world, knowing that they were putting their own lives at risk. And then getting two warnings from the US embassy while we were there, saying you shouldn’t go, the Taliban is going to try to kill you, we have credible information saying you’re going to be attacked. All but one decided to go on the caravan anyway. It was pretty remarkable, and somebody like Barbara, who’s from a very comfortable family and lifestyle and has no reason to be putting herself in harm’s way like that, to choose to do that out of a sense of conviction, and a sense of purpose, and a sense of valuing all lives, is quite remarkable. I was just in awe looking around at these delegates; At their commitment to showing the positive face of the American people, to being the citizen ambassadors, to showing that we so disagree with our government’s policies that we’re going to put our lives at risk to come and tell you that. It was very profound.

I guess about the drones themselves, I’ve been studying the proliferation of these drones and it’s really shocking to see that know 76 countries have some kind of drones and not just countries, but non-state entities have drones, like Hezbollah, that just flew drones to Israel. We’re setting this horrible example of going anywhere we want, killing anyone we want on the basis of secret information, and somehow thinking that this is not going to blowback, and that other countries are not going to do the same thing is crazy. That’s why it’s so important to get people aware of this. I think it’s hard for people to think of President Obama, whom many of them like and think of as a constitutional lawyer and a Nobel Peace Prize winner, to think well, he wouldn’t be doing something like this. The more they learn about it, the more shocked and horrified they are. We have to really build up this heartfelt opposition that’s going to be able to be effective in getting more allies in Congress. Right now there have only been 26 Congress people that signed onto a letter calling for transparency and accountability regarding these drones, but we need a lot more than that.