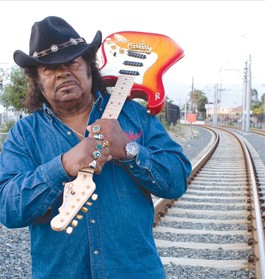 When you can count Jimi Hendrix as a member of your fan club and look back on a musical history that includes stints with Ray Charles, Sam Cooke and Otis Rush, there isn’t much left to prove. Nevertheless, 68-year-old Guitar Shorty is still on the road and coming to Santa Rosa after pocketing a 2007 Blues Music Award for Best Contemporary Blues Album. Though Living Blues magazine has called him “a blues-rock original,” he says in a recent phone interview that his new release, We the People, strays a little into soul and R&B, something he confesses he’s been wanting to do for a while.

“Record companies tend to keep artists _locked into one category. They don’t get an artist _to express themselves.”

Houston-born Guitar Shorty (David Kearney to his mom) was only 17 when he joined Walter Johnson’s _18-piece orchestra in Tampa as guitarist and vocalist. _One night in 1957, Willie Dixon approached him after a show and invited him to Chicago where they recorded Shorty’s first single with Otis Rush backing him up.

Still a teenager, he then moved to the West Coast for a job touring as Sam Cooke’s guitarist and was a featured member of Ray Charles’ road band. “I learned quite a lot from Ray, especially about delivery,” Shorty says. “He used to love listening to me do ‘Sweet Little Angel.'” While a member of Guitar Slim’s band at the Dew Drop Inn in New Orleans, Shorty caught on to Slim’s acrobatic style, doing flips and somersaults while playing onstage.

In the early 1960s, Shorty lived in Seattle and married Jimi Hendrix’s stepsister. Hendrix went AWOL several times from his Army base to catch Shorty’s shows, picking up ideas for new licks and the use of dramatics to work up the crowd. Hendrix once told him, “I learned a lot from you, a whole lot.”

By the ’90s Shorty’s career was on the wane, but a 1991 release, My Way or the Highway, won a W. C. Handy Award (now known as the Blues Music Awards) and led to contracts with Black Top and Alligator Records. In 1995, in the act of doing a flip, he got tangled in the monitor cords and dislocated his shoulder. Not that it’s slowed him down much. “Sometimes I still do them,” he muses. “I did one back in January. I plan to keep right on playing music. I can’t lay it down.”