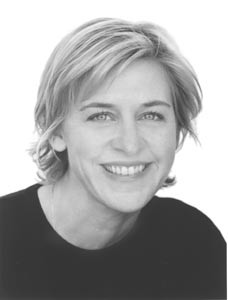 Identity crisis: When Ellen DeGeneres first revealed she was a lesbian, the public couldn’t get enough. But now that interest in her sexuality has waned, can her career as a comedian survive her status as a gay icon?

Did Ellen DeGeneres come out of the closet just to land in the celebrity activist box?

A FEW WEEKS AGO I came across two pictures in the New York Times’ coverage of the gay rights march in Washington, D.C. One photo showed an aerial view of the National Mall, packed from monument to monument with marchers. The other was a two-column shot of Ellen DeGeneres, with the indispensable Anne Heche draping an arm around her.

These two pictures just about sum up America’s relationship to Ellen, who’ll perform her stand-up routine in a sold-out show on June 25 at the Luther Burbank Center, hard on the heels of the lesbian comic Kate Clinton’s recent sold-out performance at the same venue.

The Times editor who chose to run the photo was probably searching for a celebrity to pluck from the crowd, in the same way the paper ran a picture of Gloria Estefan locked in protest with Andy Garcia outside Lazaro Gonzalez’s house. These celebrities, whom we think we know so well through A&E biographies and Barbara Walters interviews, are fed to us so we can make sense of potentially confusing events like gay rights marches and international custody battles.

So Ellen found herself portrayed in the New York Times as the emblem of lesbianism in America, which should come as no surprise. She is, after all, the Lesbian Celebrity, just as Charlton Heston is the Concealed Handgun Celebrity.

Before she ever came out on television, most rational people had probably guessed that Ellen was gay. But she didn’t reveal anything until she told the cast and crew of her show in the summer of 1996, according to a documentary produced by Britain’s Channel 4. She and the writers decided that the narrative arc of the following season would revolve around Ellen’s coming out in the spring.

Throughout the season the show offered occasional incidents of foreshadowing, such as a friend searching for Ellen in her house, only to have Ellen come out from the closet where she was hiding. At one point, Ellen told Channel 4, they contemplated having Ellen discover that she was Lebanese.

In the final months before the episode aired, Ellen and Heche began conspicuously displaying affection, and not long afterward Ellen appeared on the cover of Time beneath the headline “Yep, I’m Gay.”

The next week the episode (which, by the way, was pretty damn funny) drew a Super Bowl-sized audience, sealing Ellen’s cultural identity. Whatever she does from here on out, she’s fated, like Oscar Wilde, to be remembered for her sexual orientation first and her artistic accomplishments second.

It’s all far too ironic, since basically the whole point of the coming-out episode was that there is no difference between the pre-lesbian and the post-lesbian Ellen (and here I’m dubiously twinning her on- and off-screen personae).

In the episode, Ellen seemed determined that, for her, coming out was not a political statement. She stated emphatically to her group of bookstore friends that she was the same old Ellen as before. In fact, she was put off by the characters who were unabashedly (if stereotypically) lesbian–like k.d. lang’s butch coffee-shop folksinger. Never, Ellen seemed to say, did she ask to be an emblem for any kind of movement.

ELLEN’S FIRST brush with fame came in the mid-’80s, when Showtime plucked her from the comedy joints of her native Louisiana and named her the Funniest Person in America. She became a minor celebrity on the club circuit and appeared regularly on just about every cable TV comedy show.

She got couch on Leno and Letterman (as Woody Allen’s Broadway Danny Rose would say) even before she landed her own sitcom on ABC in 1993. Originally titled These Friends of Mine, the show, Ellen, changed names, producers, and writers but never emerged from the middle of the pack in the weekly Nielsens.

Still, the show was reliably funny–mostly because of the comic delivery she mastered after all her years on the road. Ellen’s character on the show was a lot like her stand-up personality: self-deprecating, but not self-lacerating; sarcastic, but not dark; engaged, but not political.

In her stand-up act, she keenly observed the absurdities of everyday life, but instead of framing her observations in the arch, cynical tone of a Dave Atell or George Carlin, she used the voice of a puckish innocent.

Here she is, in one of her favorite riffs, describing her bewilderment over hunters and the art of taxidermy (recall her bright, wide eyes, for she is an excellent visual comic): “I ask people why they have deer heads on their walls. They say, ‘Because it’s such a beautiful animal.’ I think my mother’s attractive, but I have photographs of her. . . . The deer heads I feel sorry for the most–you see them at bars or restaurants–they have the silly party hats on them, sunglasses, little stringers around their necks. I mean, obviously, they were at a party, having a good time.”

Like just about every humorist of her era, Ellen relies on irony. Her voice isn’t really about innocence, but experience told through the language of innocence. It’s the gentle, detached irony we all use to get through the day.

And it’s this subtle combination of guilelessness and knowingness in her stand-up act and her sitcom that made her coming out such an instant cultural phenomenon. She possessed the attractive quality of being like the daughter of a TV viewer’s next-door neighbor, the girl we all liked but suspected might be a little “different.”

After revealing her orientation, she was embraced almost universally and endured little outrage–except at the hands of Jerry Falwell, who made an obligatory stab at Ellen before going on to tackle another cultural demon, Tinky Winky.

But after the coming-out episode, Ellen’s once staggering Q rating fell into the basement because she became too closely identified with a single concept. People began to complain of Ellen saturation in the same way pundits now say the country is beset by Clinton fatigue. “When will she get over being a lesbian already?” people asked as they switched the channel. In spite of everything, Ellen railed against in the coming-out episode, she was now a lesbian and not much more.

This perception was enhanced by the content of her show during what turned out to be its final season. Though still in sitcom fashion, the show explored the daily life of Ellen as lesbian: she started dating a girlfriend, and one episode, for instance, chronicled her search for a plumber in the pages of a gay-business directory.

In interviews and articles, Ellen made it clear that it was “business as sitcom usual” on the show, with a minor change. But ABC and its parent company, Disney, slapped on a full-screen parental discretion warning before each show began. She complained that the disclaimer made viewers feel as if they were entering a nuclear test site. When the final episode ran in 1998, she told Entertainment Weekly that she was fired “basically because I’m gay.”

Heche at her side, she roundly criticized Hollywood, and the two made a big point of leaving Tinseltown for a time. Ellen returned a year later (where she is rumored to be starring in an upcoming CBS sitcom), but the stakes had changed. She became an outspoken activist for gay rights, and it’s safe to say she’s no longer the bright-eyed comic that audiences propelled onto television.

ELLEN BRINGS this full set of cultural luggage with her to the Luther Burbank Center. What will the audience expect from her performance?

What’s unfortunate is that her comedy routine, if a recent recording is any indication, has fallen off quite a bit. Her peculiar take on daily life, though it will make you chuckle, has grown stale. Now she sounds like Jerry Seinfeld in one of his have-you-ever-noticed-such-and-such riffs.

Here she is talking about airline stewardesses: “They have this attitude, and they can afford to have the attitude because they have the power: they have the peanuts. They have these six peanuts that we need. Somebody could offer that to you on the street, [and you’d say,] ‘I don’t want that shit. Get that away from me. Six peanuts!’ Somehow they’ve done research; they know the higher we go, the more we need nuts.”

But Ellen’s comedy may not be the point, because she’s no longer just a stand-up comic. She’s been expelled from the garden of her prior innocence into the fickle and unmerciful world of celebrity expectation. Maybe her once fine ear for irony will be at work again, allowing her to profit from the potentially dulling experience of being both a person and an object.