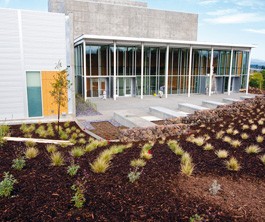 In Napa, the hottest show in town isn’t the much-buzzed-about Taming of the Shrew opening this weekend in Veterans Park. It’s not even the enormous pirate ship constructed as the set of that guns-and-cutlasses production. No, at the moment what has captured the community’s attention is the brand-new performing arts center that on Aug. 12 had its official opening on the campus of the Napa Valley College.

A long-in-the-works dream of the late NVC president Chris McCarthy, the 48,125-square-foot, state-of-the-art facility was made possible mainly through a bond measure voted in eight years ago. The finished product, a $31.5 million glass and concrete marvel, surpasses even the hopes of its longest and strongest advocates.

“The center itself is simply extraordinary,” exults Jennifer King, Napa Valley College Repertory Theater artistic director, speaking with barely contained enthusiasm on the first day of the fall semester. “I have to say there is probably no other facility in the North Bay like it,” she says, “a facility designed specifically for education and performance, a facility built with incredible vision and forethought.”

It is King’s belief that the new facility will establish NVC as a West Coast version of the world-renowned North Carolina School of the Arts.

“But our building is a lot better than theirs,” King boasts, describing the center’s three stories, replete with a 480-seat main theater, a 93-seat black box space, theater arts and music wings, full costume and scenery shops, plush dressing rooms with showers and all the desired amenities.

“This is an absolutely amazing space,” King says, who was formerly with Sonoma County Repertory Theater. “Yesterday, we had our auditions for our first musical, Aladdin, and we held them in the main theater. It was the first time I’d heard anyone sing or do music in the space. I can’t tell you how good it sounded. It’s acoustically perfect. I’ve never experienced such incredible acoustics. Of course, I’ve been working in funky little theater spaces for most of my professional life. The theater we’ve been using here on campus is just a glorified lecture hall. So to move from that to something that is so stunning is really a dream come true.”

King points again to McCarthy’s original decision to push forward with plans for the facility, a dream he never saw completed. He passed away unexpectedly last year.

“When Chris first became president here, when he first saw the conditions in which the performing arts department was working, it moved him to tears,” King says. “He made a commitment to create a space on campus that was equal to the work being done by the students and faculty. He wanted something that would serve the students and the community, now and into the future.

“There’s something about having a dream for so long,” she continues, “and then to finally see that dream manifest that is just so incredibly wonderful. Walking into this building, it makes coming to work absolutely magical.”