.Don’t Fence Me In 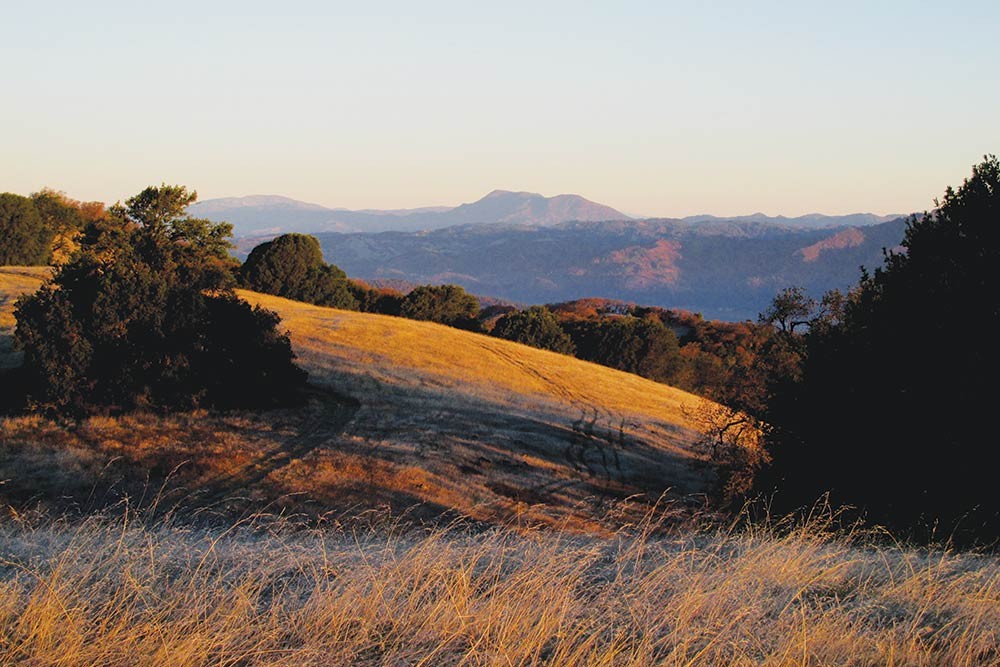 Celebrating its 25th anniversary, Sonoma Mountain Preservation released Where the World Begins, a book of photographs and stories centered around the namesake landmark. Created by Art Dawson, the book rose to the top of Copperfield’s bestseller list in Petaluma shortly after it hit stores this spring.

“Our intention is to deepen people’s relationship with place, because when you’re aware of something you’re more likely to care about it,” said Meg Wheeler, president of Sonoma Mountain Preservation, a land preservation organization. “It helps people see themselves in their environment in a different way, how the mountain roots the landscape because it’s encircled by a quarter of a million people.”

Sonoma Mountain presides over the west side of Sonoma Valley like a round and furry beast. At 2,464 feet high, its importance is easily taken for granted by the traffic rushing by on Highways 12 and 101. With Mt. Bennett and Mt. Taylor, it forms the smallest mountain range in the Sonoma Country. It can be seen from all over the county, but its exact peak has never been definitely identified.

“It’s a mountain without an ego,”chuckles Dawson.

Dawson is the son of a physics professor who began roaming the woodlands as a boy growing up in New Jersey. He is a storyteller, a poet and a teacher who has calls himself “historical ecologist.” He’s also authored The Stories Behind Sonoma Valley Place Names and worked with the Sonoma Ecology Center to collect stories about Sonoma Creek as told by local elders. That became the book Creek Wisdom.

As much as Where the World Begins documents the history and science of the land, the book is about the relationships of local people for whom the mountain matters deeply. The late Pat Eliot, to whom the book is dedicated, was a longtime advocate for Sonoma Mountain. She passed away in 2016. She became friends with another would-be defender, Mickey Cooke, when they were young girls exploring the mountain on horseback. Eliot was working at the dude ranch that had been Jack London’s Beauty Ranch. Both returned in the 1970s to discover that Sonoma County had changed.

“Pat was the one who recognized what was going on,” said Cooke.”This place was just booming. You couldn’t ride anywhere because fences were going up. The new people liked their fortresses with eight-foot fences.”

Eliot and Cooke dedicated themselves to protecting the mountain.

“Of course we also wanted to create open access,” said Cooke, “so that people could enjoy the mountain, but we didn’t want to push that because we were afraid we would get pushback from neighbors.”

The duo worked with county agencies to create an ordinance to regulate the design of new housing. It was adopted in 1978. In 1994 Sonoma Mountain Preservation took form and battled the state over a vineyard proposed on the eastern slope above the Sonoma Developmental Center. “We saw the mountain as a whole piece being chopped up into little tiny bits.”

With support from local environmentalists, they blocked the vineyard. In 2009, the late Kirsten Lindquist, Cooke’s daughter, learned that the top of the mountain was for sale. She called Eliot’s daughter Wendy Eliot, conservation director at the Sonoma Land Trust, for help.

“We’ve got to get this for the moms,” the younger Eliot said.

They did. The Sonoma Land Trust, the Sonoma County Agricultural Preservation and Open Space District and the California Coastal Conservancy put up $9.95 million to buy the orchard property. The mountaintop later became part of Jack London State Historical Park.

In a recent victory, the land trust and other parties got the state to commit to protecting 700 acres on the eastern slope of the mountain around the Sonoma Developmental Center, which is an pinch-point in an important wildlife corridor that runs from Lake County to the sea.

The stories told in this new book are lyrically rendered. Beautiful photographs of the mountain, its surroundings and the people who are part of its story enrich the tale.

“To visit the mountain is to exchange a human centered world for something akin to the old tales—a place where a more ancient order still holds sway,” writes Dawson.

Facing another era of booming development, inflated real estate, and growing numbers of people, the book reminds us of “the healing we receive by becoming connected with place,” says SMP’s Wheeler. “We all have indigenous souls.”

The Ethics of Place

An interview with Greg Sarris

“On a fence up on Gravity Hill, where Lichau Road seems to be going up but is in fact going down, two Crows sit talking. One is called Question Woman. She has no memory, and has to ask a lot of questions. The other is Answer Woman. She can only tell stories when she is asked.”

Thus does Greg Sarris frame his recently published collection of children’s stories, How the Mountain Was Made. Sarris is the Tribal Chairman for the Federated Indians of Graton Rancheria who own Rohnert Park’s Graton Casino, which donates a percentage of profits to help tribal people and preserve native lands in the region.
The following are excerpts from an interview with Sarris about the book and Sonoma Mountain.

“I suppose each book has its reason for being. For native peoples, the landscape has always been the sacred text. That’s how we know ourselves, how we understood who we were. With so many indigenous people throughout the world, not only do we get disenrolled or colonized or whatever, but the landscape suffers the same kind of horrendous treatment and so as the landscape gets burned or destroyed, reshaped in some cases. What we’re fortunate to have left are just shards and pieces. What we’ve been trying to do is pick up those pieces and keep the culture alive. What can we learn from them and how can we continue those cultures, those histories, those stories in a contemporary context?

“The stories had to do with teaching that community is important, thinking for the self will usually get you in trouble, where they contrast with a lot of the western fairy tales that are pretty dark and scary, and they’re not real. Look at Cinderella. If you work hard and put up with abuse, your prince will come. No wonder so many of us grow up unhappy. The prince doesn’t come along. What happened?

“Our central figure is coyote and he’s a trickster, he gets into trouble, and you get the sense that the world was created by a series of mistakes whereby you’re forced to negotiate your own reality, always remembering that if you’re selfish, bad things will happen.

“We believe that when the animals were people, they lived together in a village. Coyote and a couple of animals got greedy and hungry and they decided to kill someone, a deer, to eat her. They trapped her and she escaped, and she ran home and said, Coyote’s trying to kill me! Then all the animals said “oh my God,” we have to figure out something, and bear grew claws, eagle grew wings, they all ran away. And the only ones that were left were Coyote and people. And people, human beings, were seen as the dumbest of all, who because of trickery lost communication with all the animals and what our job as human beings is to constantly look for ways to reconnect with our villagers.

“Coming on the mountain you find things that are so unpredictable, so unbelievably unusual [like] outcroppings of rocks, Gravity Hill. And the mountain has so much water! And it’s shifting! A hill will rise, another will sink. Our rock walls are always giving way. The land is always moving.

“We always believed everything had a spirit, had songs. We had to think of others because it would come back on you. When the white people came, they called them pala’chah. In Kashia Pomo, it means miracle. They were damming the water and chopping down trees and killing all the animals, and people said, we always believed that if we did things like that, we would be punished, but instead of being punished, more of them kept on coming! So we called them the miracle people.

“And of course, as you know, it has come back on us.
“That’s why we need these stories, and things that make us responsible to one another and for one another, that’s what’s going to save us.”