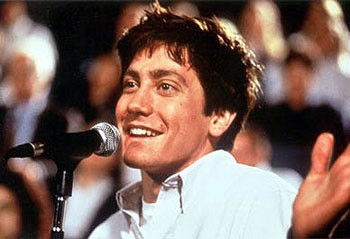 Unbalanced ‘Donnie Darko’ forestalls the end of the world

NOW IT CAN be revealed. The end of the world on Nov. 1, 1988, at 6 a.m. was prevented by the actions of an emotionally troubled upper-class high school student named Donnie Darko.

Donnie (Jake Gyllenhaal) is given a four-week advance notice of doom for the earth. The messenger is Frank, the bunny in the mirror. This phantom from the future is a sneering 6-foot-tall monster, invisible to all others, bearing the same relation to Harvey the Rabbit as James Stewart does to Jack Palance.

Despite medication, therapy, and the obliviousness of his family, Donnie carries out the tasks Frank gives him. He owes the time-traveling bunny gratitude for its first tip to leave the house and go out all night: Donnie was spared when a jet-engine turbine crashed into his bed through the roof of his house.

Now Donnie must cope with his secret knowledge, his life in high school, and a flirtation with similarly troubled Gretchen (Gena Malone), a girl whose mother is in the witness protection program.

Early on, there’s a smart scene of a high school arriving for its day accompanied by the Tears for Fears hit “Head over Heels.” Kelly doesn’t take the usual cheap shot about how corny an old song was–he makes the glancing images match the uneasy minor chords of the tune. The scene is a reminder of how untouchable even the recent past is.

In closed spaces, like a bedroom or a psychiatrist’s office, Kelly is at home. In other moments, like a run-on scene of little girls dancing for a pageant, it looks as if he set the camera up and forgot to shut it down.

Mary McDonnell plays Donnie’s mother, and it’s never really clear if she’s in denial about her son’s increasingly eccentric behavior. Her sketchy reactions get stranger as the film goes along–you ask yourself, what drug is this woman on? Drew Barrymore, who executive produced, is awkward playing an English teacher. No sore thumb ever stood out like a slumming film star in an indie film.

And Maggie Gyllenhaal, Jake’s sister in real life, is slighted playing Donnie’s sister. (Anyone who remembers her as Raven, the pert Satanist in Cecil B. Demented, will be a little unhappy that she didn’t get more scenes.)

In the lead, Jake Gyllenhaal is on the emotionally wet side; as if he’d had a swim in Dawson’s Creek. He does all the reacting for you. He’s more pleasurable in the sneaking amusing moments, as when Donnie embarrasses his psychiatrist with the power of his sexual feelings.

Still, Donnie Darko doesn’t cheat. The film explains its mysteries, and Kelly has brought out the poetry in a weird but not uncommon tale. One doesn’t want to drown a new talent in praise, but the signs are very good. You don’t need to be a visitor from the future to see that Kelly’s going places.