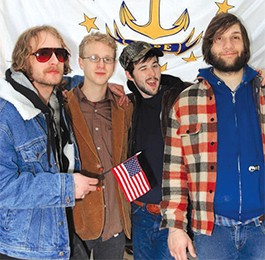 I s it just us, or do wineries just keep getting cooler? The days of stuffy and exclusive winetastings are seemingly disappearing, as evidenced in part by Gundlach Bundschu’s recent brainchild, the Indie Rock Concert Series. Of course, concerts featuring “indie” bands are not new. But tossing an up-and-coming Rolling Stone -favored band like Deer Tick on a redwood stage while the public basks among picnic baskets and goblets of wine is distinctly Sonoma County.

Gundlach Bundschu hospitality manager Megan Cassady said booking the plucky rock band from Rhode Island was simply a matter of timing and good luck. “They’re playing at the Independent a few days after, so they were in the area,” she says. “Plus, they seemed like a good fit.”

Last year’s acts, Jonathan Rice and Maria Taylor, drew around 200 people, but Cassady says the winery is hoping for closer to 250 this time around. Guests can settle in on the grassy, sloped hill with a glass of wine, nosh rotisserie chicken provided on-site or pack a picnic to kick off the summer nights to come. “We’ll have our wine bar open so people can drink some wine and listen to cool music that Sonoma doesn’t always get to see,” she says.

John Joseph McCauley III, lead singer of Deer Tick, discussed the tour and upcoming album release from the road, en route to Washington, D.C., after a “crazy” evening at the House of Blues in Boston. McCauley seemed to be feeling the aftermath as he chatted about the change in band mates in a gravelly voice.

McCauley is the sole musician remaining from Deer Tick’s freshman album War Elephant , released in 2007. The band’s newest creation, Born on Flag Day , will be released June 23. “Everybody in the band is new from War Elephant ,” he says. “It makes shit a lot easier for me. All the guys in the band now are fantastic players. I don’t have to worry about anything with them.”

Deer Tick have been called everything from alt-country to freak folk, but McCauley isn’t buying it. “We’re a rock ‘n’ roll band,” he says, somewhat emphatically. “And if somebody doesn’t believe it, they should just come see us play.”