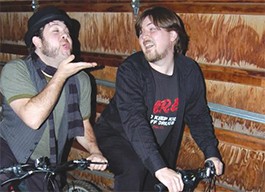 Try to Keep Up

I mprov shows are generally either pee-your-pants fantastic or . . . bad. Really bad. Sitting in a dark comedy club with a pitying smile plastered across your face as a handful of comics desperately bluster around the stage is no fun for anyone. Thankfully, the Sixth Street Playhouse has teamed up with Instant Gratification Theater to prevent such a tragedy by presenting a show, aptly titled the Best of Sonoma County Improv, featuring actors from Sixth Street Improv, the World’s Biggest Comedy Duo, the Improvaholics, Hot Curtain, Slip-Goose Monkey, the Improv Orphans and a collective “jam” with members of Whose Line Is It Anyway? and more.

Matlock Zumsteg, a founder of the 10-member World’s Biggest Comedy Duo (pictured above with Brandon Wilson), likens improv to a Zen Buddhist way of life. “A lot of improv has to do with living in the moment, and not really knowing where a scene is going to take you. So you have to be really open-minded to that possibility.”

Zumsteg recalls a recent stage blunder: During a round of “Moving Bodies,” an audience-participation game, Zumsteg got up close and personal with Zack Koback, a fellow performer. Very up close and personal. “I was in a scene with Zack, and he was wearing these very loose, baggy MC Hammer-type shorts, and I don’t think he was wearing anything underneath. One of the audience members who was moving me, he put my hand right on Zack’s penis. I felt it right under the pants,” he says, laughing. “The whole audience saw my reaction to it, and I screamed, ‘I’m touching it, oh God I’m touching it!’ I complained for two hours of feeling phantom penis on my hand afterwards.”

The thrills–and complications–that come with audience participation are inevitable, he adds, even if the crowd goes for the raunchy joke right off the bat. The art of improvisation isn’t all phantom penis and forcing a laugh out of the audience, Zumsteg stresses, and rushing a comedic moment often leads to disaster.

“Improv really lends itself to comedy anyway, so we don’t need to try super hard to make things funny,” he says. “We focus on just building a scene and allowing whatever needs to happen to happen.”