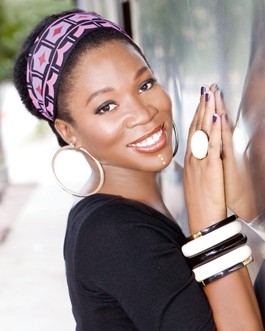 India.Arie’s overriding goal as a music artist hasn’t changed over the decade in which she’s been making music professionally. “I wanted to make music that moved people in a positive way,” says Arie in a recent phone interview. “I wanted to touch people and make people feel good, and think. That was my goal.”

Arie began writing songs while attending college in Savannah, Ga., and got her big break with a song released on a compilation CD in Atlanta, winning her a second stage slot at a pair of Lilith Fair shows. A scout from Motown Records saw Arie, signed her, and in 2001 the label released her debut album. Immediately, Arie made good on her goal of affecting people with her music. Acoustic Soul eventually topped 2 million copies sold and earned Arie seven Grammy Award nominations. She appears June 14 at the Harmony Festival.

Her second album, the 2002 release Voyage to India, did nearly as well, topping 1 million copies sold and winning two Grammys. Four years later, her third album Testimony: Vol. 1, Life & Relationship soared to No. 1 on the Billboard magazine album chart, but by that time, Arie was struggling inside. A turning point came in October 2006, when she realized she had hit a crucial point in her development as a musician and as a person.

“It reached a critical mass after I finished touring with Testimony: Vol. 1,” Arie says. “I had this moment where I just lost it. I just completely blew my top. I knew that day that something had to change, and I cried for a few days after that. And then I was like, ‘How am I going to shape my life?'”

One aspect of Arie’s dilemma was the age-old battle between art and commerce. While Arie had for the most part been true to her art, she realized that she could no longer stand to make concessions to the marketplace as she had done previously. “I knew that my production decisions I made [on Acoustic Soul] had to be more in line with what was on the radio, so I did that,” she admits. “It wasn’t how I viewed those songs. I did that even more so on my second album. I felt I was compromising, and I did compromise. I like that album now, in hindsight. When I listen to it, it’s nice. I stand by the songs, definitely, but the production—uh, sometimes not so much.”

Arie felt she got closer to staying true to her art on Testimony: Vol. 1, but wasn’t able to fully execute some of the musical and emotional ideas that she had for her music. A key change along the way was a move from Motown Records to Universal Republic—ironically owned by the same parent company—after she decided she could no longer compromise her art in an attempt to achieve greater popularity.

Then there’s the biggest lesson of all that Arie has learned. “It’s OK that everybody doesn’t like me. I wanted everybody to like me. Now it’s OK if they don’t, on a personal level and in the musical realm.”

On Testimony: Vol. 2 Love & Politics, Arie says she is more true to herself than ever. She took control of production on the CD, sandwiching the recording of basic tracks with a live band around three months of preproduction and a full year of recording lead vocals, guest musician parts, overdubs and, in the case of a few songs, editing out parts to create more stripped-down final versions of those tunes.

Musically, the CD isn’t a huge departure from her previous three albums. She still bases several songs around her acoustic guitar, but the common description of Arie’s music being “acoustic soul” more than ever feels too narrow. The song “Therapy” leans more toward pop, while “Ghetto” has elements of an African-influenced brand of soul. A handful of others (the sunny “Yellow,” the edgy and funky “Better Way”) find Arie beefing up the instrumentation and further broadening her stylistic reach.

The purity and honesty in her new music is enriching Arie’s musical life on another level—by making her live performances more satisfying than ever. “It’s been really fun because of this album,” Arie says. “I love this album. It’s the first time I really feel that I presented myself the way I see myself. So being able to sing those songs live feels really good.”