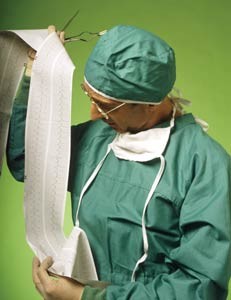 Reading the Waves: All medical facilities in the fault zone are on shaky ground.

Decreasing income, rising costs and looming deadlines to meet rigorous earthquake safety regulations are shaking up California’s hospitals, and the rumbling is especially strong in the Sonoma Valley. About 20,600 special ballots were mailed out April 3 and are due back by May 2. Depending on who’s talking, Sonoma Valley Health Care District’s $148 million Measure C is either the only way to continue providing any sort of decent local healthcare or it is a move to create a grandiose and unnecessary facility by forcibly taking prime agricultural land from a longtime farming family.

Geographically isolated (locals joke about living on “the island” of Sonoma), Sonoma Valley’s election mirrors trends throughout the North Bay and the state as residents struggle to balance the need for seismically safe hospitals with the realities of rising costs, shrinking open spaces and changing medical technologies.

Southern California’s 1994 Northridge earthquake left several key medical facilities extensively damaged and temporarily unusable. In response, the state has set the bar high. By Jan. 1, 2008, all hospital buildings must be capable of remaining standing after a major earthquake; by Jan. 13, 2030, they must meet stringent standards to leave them completely operational after such a shaking.

Facilities struggling to meet the 2008 requirements can apply for a five-year extension. Sonoma Valley Hospital is among the many granted a reprieve until Jan. 1, 2013. A state hospital regulations manager says that to be sure of meeting the 2013 deadline, design plans should be submitted by mid-2007 or soon thereafter.

“The goal of the law is extremely worthy. The problem is how you comply with it,” says Jan Emerson, spokeswoman for the California Healthcare Association (CHA), a trade group for hospitals statewide. The new seismic standards affect about 2,700 buildings at approximately 430 hospitals, Emerson says.

This is an unfunded mandate from the state, with no money provided to pay for it all. Emerson says the Sonoma Valley Health Care District is fortunate to be able to ask its voters for a bond measure to fund the required improvements. That’s a financing option that private or independent hospitals don’t have.

To build a new hospital, the Sonoma Valley board is hoping two-thirds of the voters will approve $148 million in bonds plus the right to use eminent domain to acquire 16 acres of farm land from the Leveroni ranch family. Eminent domain gives the government the legal ability to pay market value to take property from unwilling sellers when the move is considered to be in the “public good.” Eminent domain was used frequently in the 1950s and 1960s when California was building its extensive highway system, and has been invoked numerous other times to acquire land for schools, roads, hospitals and other public construction.

The Leveronis have placed most of their more than 1,100 acres under the care of the Williamson Act, which strictly limits development of agricultural land, but they left about 41 acres free of those restrictions. The hospital has offered $8 million for 16 of those 41 acres, but the Leveronis say the land is an integral part of their farming operation and can’t be spared. They worry that locating a modern hospital within smelling distance of their agricultural operations could eventually force them to stop farming.

Opponents of Measure C question the use of eminent domain, the size of the new hospital, the plans for a private office building on the same property and the idea that the Sonoma Valley medical facility might close if this bond measure fails. Some argue vehemently for keeping the hospital site within Sonoma’s city limits, saying a new building could be built nearby and the current one converted to doctors’ offices. Others wonder why the existing hospital can’t simply be remodeled to meet the new seismic guidelines.

Bill Boerum, chairman of the No on C campaign, says eminent domain is “a pretty reprehensible practice for any government agency to indulge in.” He wants to know why a 20- or 30-bed facility wouldn’t be enough for Sonoma Valley and questions the plans for a medical office building on hospital land. He admits he didn’t get involved in the eight-year-long search for a solution until this January, when the hospital board put Measure C on the ballot, but says now that most of the community is engaged, it’s time for a dialogue about what should happen next.

Any site in the land-locked Sonoma Valley would require eminent domain, says Scott Gregerson, a Sonoma Valley Hospital vice president who has taken a leave of absence to lead the Yes on Measure C Campaign. Several opponents advocate the use of what they refer to as the “Cuneo property.” That land is not for sale, Gregerson says, and could only be acquired using eminent domain.

Others have suggested parcels in an industrial area east of town or in the south end of the valley, which would mean extending the sewer system and the voter-approved urban growth boundary–a move smart-growth advocates told hospital officials they would fight vigorously. “If they want a hospital in this community, eminent domain is something that will be a part of that effort,” Gregerson says. “They’re not growing any new land and nobody is interested in selling.”

Retrofitting Sonoma Valley’s existing 50-year-old building would cost at least $100 million and require closing the hospital for about two years, he adds. It’s not like a nine-story hospital where officials can close and retrofit one floor at a time; the oldest building houses the hospital’s operating rooms and emergency room, which are difficult to temporarily relocate. No portable building exists that meets the mandatory code requirements, Gregerson says. And tearing down the hospital and rebuilding on the same site would mean a five-year closure.

All these options have been considered in the last eight years, and there isn’t time for another community dialogue, Gregerson says. “We’ve gotten to a point where we don’t have a choice. We have to place our bet and then go. We’re all in. We have to decide now if we want healthcare in Sonoma.” Boerum terms such statements “scare tactics.” Gregerson responds, “It’s scary, but it’s not a tactic.”

The law calls for hospitals not properly retrofitted by Jan. 1, 2013, to be closed, and it’s unlikely that will be changed, says the CHA’s Emerson. “We’ve been attempting for the last six years to get modifications to this law. So far we haven’t succeeded.” Currently, the CHA is supporting two bills, one giving a two-year extension to hospitals actively under construction on Jan. 1, 2013, and another letting hospitals skip those requirements if they meet the more stringent 2030 standards by 2020. But unless the law is changed, hospitals not meeting the 2008 standard by the extended 2013 deadline will be shut down.

This is something Sonoma Valley residents need to keep in mind, Emerson says. “The important thing to understand is that this is not unique to this community. This is a statewide problem. Wanting to bury your head in the sand and think it will go away is not a good approach. The voters need to ask themselves, do they want to make sure they have 24-hours, seven-days-a-week hospital services in their community? The answer to this question will determine a lot.”