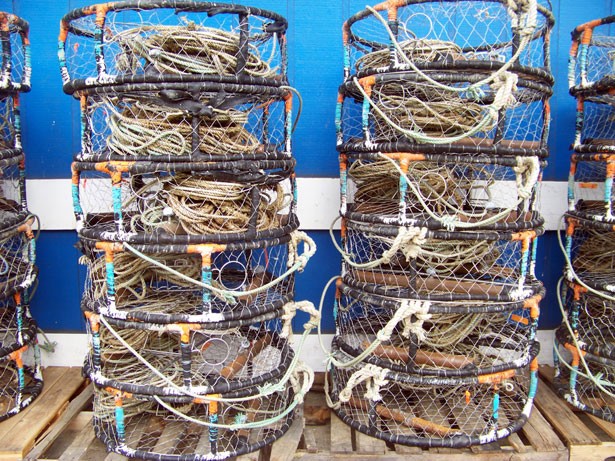 California’s crab fleet is back in action after many months of being stuck at the dock waiting for domoic acid levels to drop in the Dungeness fishery. Now that they’re back to work, State Sen. Mike McGuire,
D-Healdsburg, has another crab-related bill he’s pushing through the Legislature—one to keep the ocean free of lost crab gear, or “ghost pots,” as they’re called. McGuire last week offered a bill that aims to help California’s whale population from getting entangled in lost or abandoned crab gear that litters the ocean floor. His bill, SB 1287, provides incentives to fishermen “to retrieve Dungeness crab fishing gear that would otherwise be lost.”

It’s the first program of its kind in California that isn’t a voluntary pilot program; other coastal states have also enacted ghost-pot retrieval laws. Every year, writes McGuire’s office in a release, hundreds of pots, some with hundreds of feet of rope attached, are lost during the fishing season. Whales get entangled in the gear, and it’s a bad scene for the mammals.

The McGuire plan would be administered through the state Department of Fish and Wildlife. Who’s going to pay those incentives to gear retrievers? The crabbers themselves will fund the program. Under McGuire’s bill, the crabber whose lost or abandoned pot is retrieved will pay a retrieval fee once it’s been salvaged. That fee has yet to be set by Fish and Wildlife.

A single commercial Dungeness crab pot retails for around $100, according to online sources. They’re not cheap to replace. Does the fisherman who lost the pot at least get it back after paying the retrieval fee? Yes, he does. The State Senate’s Natural Resources Committee takes up the McGuire bill on April 12.

Petaluma-based vegetable and quail-egg farmer Molly Myerson recently lost her business to a fire, a tough deal for her and the Bay Area restaurants that purchase her eggs and produce. Myerson, a thirty-something native of New York City, operates the one-acre Little Wing Farm between Bloomfield and Tomales, and was profiled in these pages last Thanksgiving for the amazing, locally sourced holiday menu she contributed to the pages of the equally amazing, locally sourced Inverness Almanac. There was a benefit for Myerson at the restaurant Saltwater in Inverness last week, the first of a few that are in the offing as Myerson tries to get back on her feet. If you want to help her out, contact Myerson directly: PO Box 2770, Petaluma 94953.

Santa Rosa City Council member Julie Combs sent us a heads-up text last week as the Santa Rosa City Council was voting on a couple of rent-related regulations that we wrote about last month. Combs reported that a rent-stabilization and a just-cause-for-eviction measure were voted out of a council subcommittee “with a recommendation to support” on April 1. Those measures will come up for a full vote on May 10 and would enact a so-called soft rent stabilization program that won’t come with a big new enforcement bureaucracy.

Gov. Jerry Brown on Monday signed legislation that will steadily raise California’s minimum wage over the next five years to the $15 an hour that’s animated a national fight over living wages over the past couple of years. The California minimum wage presently stands at $10 an hour and will increase by $1 an hour until 2022, at which point the cost of living will have outpaced $15 an hour and we’ll be living in our car again, eating gas station peanuts for dinner. You just can’t win.